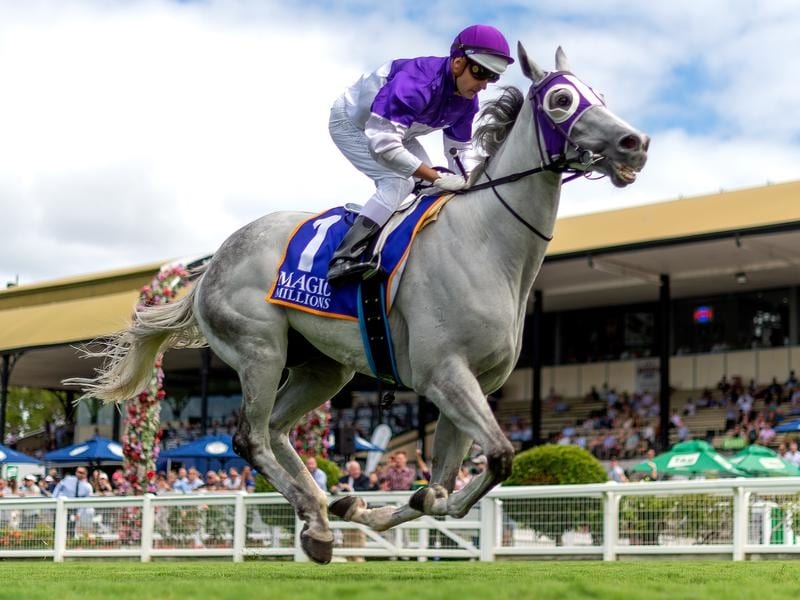 The Gold Coast Turf Club has probably got an extra few thousand punters to Magic Millions day in a fortnight after crowd favourite The Candy Man won the Shoot Out Quality (2200m).

The mid Christmas holiday meeting at Eagle Farm rarely draws a big crowd but there was a well above average gathering on Saturday and many were there to see The Candy Man.

The win gave the gelding a wild card entry to the $1 million Magic Millions Trophy (2400m) at the Gold Coast on January 11.

Trainer Barry Baldwin said The Candy Man might not be the best horse in Queensland but he appeared to certainly be the most popular.

“You could hear the cheering here today. But it isn’t just at the track but also pubs and clubs. I am told when he runs there is always a big cheer every time he wins,” Baldwin said.

“I suppose it is because he is a grey, who races in (former champion) Gunsynd’s colours and he has beaten a severe injury to get to the races.”

Baldwin said he couldn’t get The Candy Man any better for his Magic Millions tilt.

“The only sad thing is that my old mate (jockey) Michael Cahill is out with a broken foot. But Brad Stewart is doing a good job as a replacement,” he said.

“We rode him back in the field and let him come into it from the 600m.”

Stewart said he let The Candy Man travel into the race under his own steam and the gelding had sprinted at the 300m.

Glen Boss, who rode Morton’s Fork, said he had a lovely run in the race.

“The bottom line is the winner was too good,” he said.

Ryan Maloney said Winning Ways ($8), who ran third, was getting back to her best.