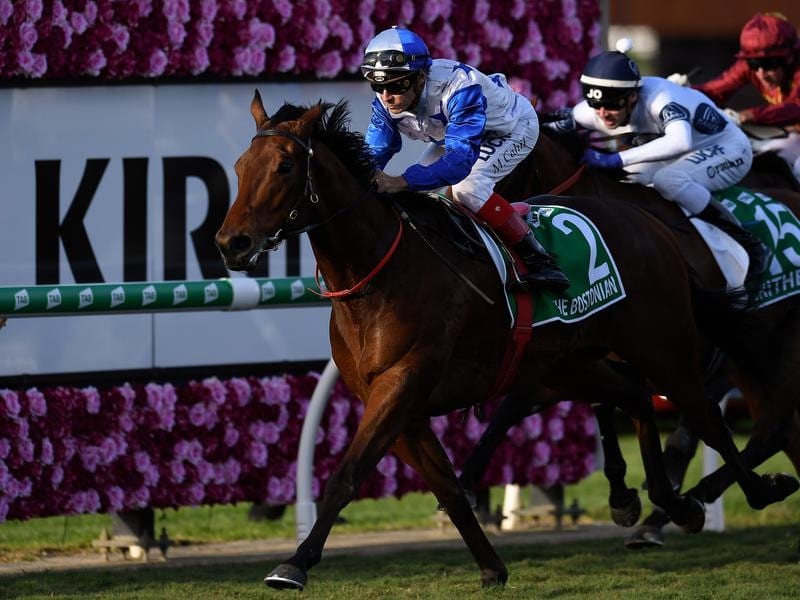 The Bostonian will have to carry 57kg in his bid to complete Brisbane’s sprint triple crown.

New Zealander The Bostonian will have to carry the biggest winning weight in 27 years if he is to complete the first treble of Brisbane’s Group One sprints.

Weights for the Stradbroke Handicap (1400m) were released on Monday with Osborne Bulls topweight with 58kg but he will not start.

The Bostonian was given 57kg with Nature Strip, who also is a non-starter, the next highest on 56.5 kg.

At least eight of the top 20 in the weights are unlikely runners.

A total of 144 horses were weighted but that will drop away substantially when first acceptances are taken on Wednesday.

The Bostonian has won the first two legs of Brisbane’s Group One sprint triple crown – the Doomben 10,000 and Kingsford Smith Cup.

West Australian Barrosa Boy has come the closest to winning all three races, claiming the BTC Cup (Kingsford Smith) and Doomben 10,000 in 1992.

Barrosa Boy also won the BRC Sprint that year but it was run after the Stradbroke.

Rough Habit carried 58.5kg to win the 1992 Stradbroke which equalled the 58.5kg lumped by Campaign King in 1988 as the weight carrying record since the race went metric in 1972.

Campaign King is the last horse to complete the Doomben 10,000 Stradbroke double.

The Bostonian’s trainer Tony Pike said the weight was what he expected.