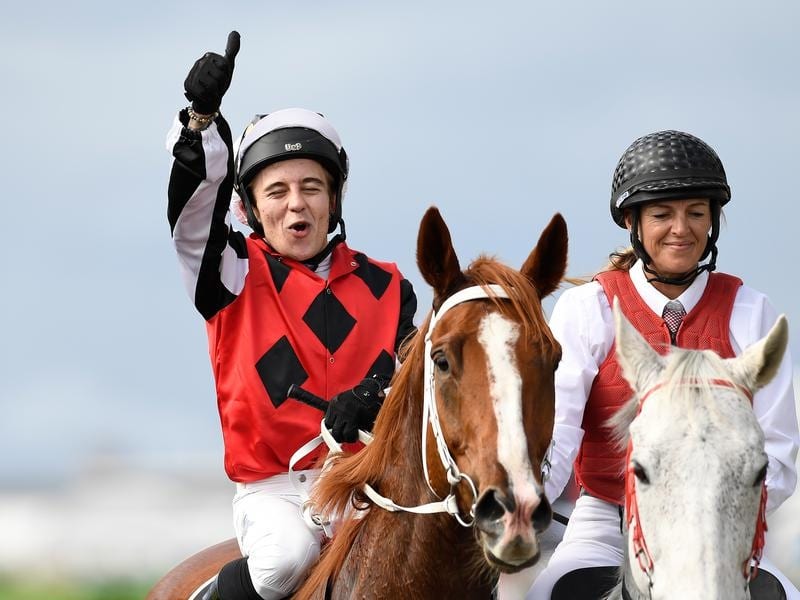 Jockey Luke Tarrant has combined with Fighting Teo for a tough win at Doomben.

Toowoomba gelding Fighting Teo showed a long campaign had not worried him with a tough win in the Australian Racing Hall of Fame Handicap at Doomben.

Fighting Teo ($7) has been racing for the entire year but showed no signs of being over the top when he beat Duchess Of Lennox ($5) by a short neck with a half neck to Guise ($3.60) in third.

Trainer Kevin Kemp has high hopes Fighting Teo can go on to win in stakes company later in his career.

“He ran fourth in the Gold Coast Cup at his previous start and he was coming back from 2400m today,” Kemp said.

“But Luke (jockey Tarrant) gave him a peach of a ride and he was too strong for them.

“Fighting Teo is by Teofilo and the breed generally get better with time. I think there are plenty more wins in store for him.”

Fighting Teo once had a reputation for being inconsistent but has been racing far more truly of late and it is a credit to Kemp’s hard work with the gelding.

“He is a big horse but we never lost confidence he would make a stayer,” Kemp said.

Tarrant said he had a lovely ride on Fighting Teo and the gelding had been too strong at the finish.

“We virtually never went around a runner and that made the difference,” Tarrant said.

Trainer Chris Waller is still hopeful Duchess Of Lennox can go on to the Queensland Oaks but both might need more prizemoney to make the field.