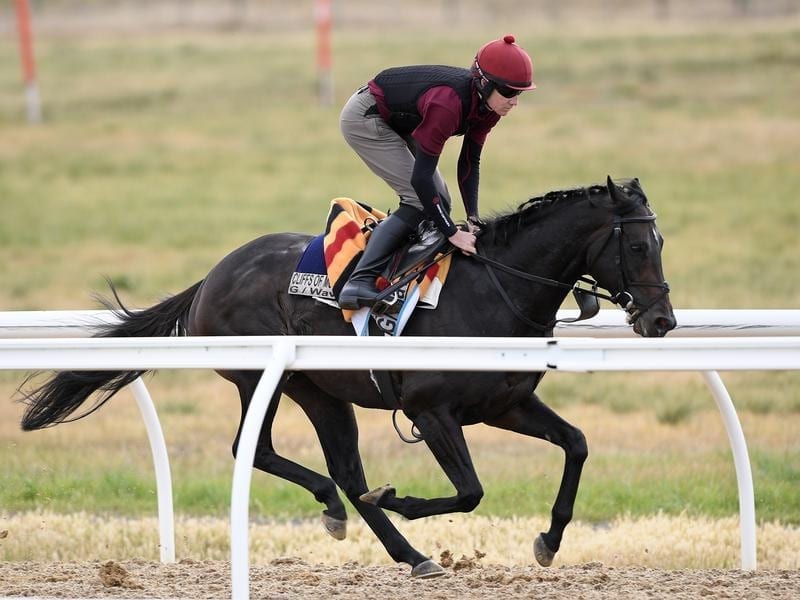 Irish horse The Cliffsofmoher will run in the Caulfield Stakes for owners Nick and Lloyd Williams.

Irish horse The Cliffsofmoher is to follow the spring path of Johannes Vermeer as Aidan O’Brien attempts to land a first Melbourne Cup.

Johannes Vermeer went agonisingly close in last year’s race, only to be beaten by Rekindling, trained by O’Brien’s son Joseph.

Like Johannes Vermeer did last year, The Cliffsofmoher makes his Australian debut in Saturday’s Group One Caulfield Stakes before progressing to the Caulfield and Melbourne Cups.

The Cliffsofmoher, whose name has been changed from Cliffs Of Moher in Australia, is part-owned by Lloyd and Nick Williams who will also be represented in the Caulfield Stakes by Homesman.

“Aidan and the team think that the ‘JV’ program worked pretty well last year and want to do the same thing with The Cliffsofmoher,” Nick Williams said.

Homesman is rated the slightly better chance in Saturday’s race in latest markets and Williams is expecting the last-start Underwood Stakes winner to run well.

“It’s a very competitive race and we just want him to run well and that will top him off for the Caulfield Cup,” Williams said.

Williams said the team decided to not to run The Taj Mahal on Saturday.

“He’ll have a gallop at home on Saturday rather than having a run,” Williams said.

“He’s in great order and I think he’s a super chance in Caulfield Cup.

“The good thing about Homesman and The Taj Mahal they’re both go-forward horses and make their own luck in that extent.”

Yucatan, another of the O’Brien and Williams team, runs for the first time in Australia in the Herbert Power Stakes looking to earn a place in the Caulfield Cup field.

He joined The Cliffsofmoher in a work-out at the Werribee quarantine centre on Thursday, jumping from the barriers after galloping on the all-weather track.

O’Brien’s travelling foreman T J Comerford said it was a practice the stable had used previously.

“We did it last year with The Taj Mahal and I thought it worked well,” Comerford said.

“It helps sharpen their minds two days out from a race so they don’t get too lackadaisical.

“It works well and it can’t hurt.”