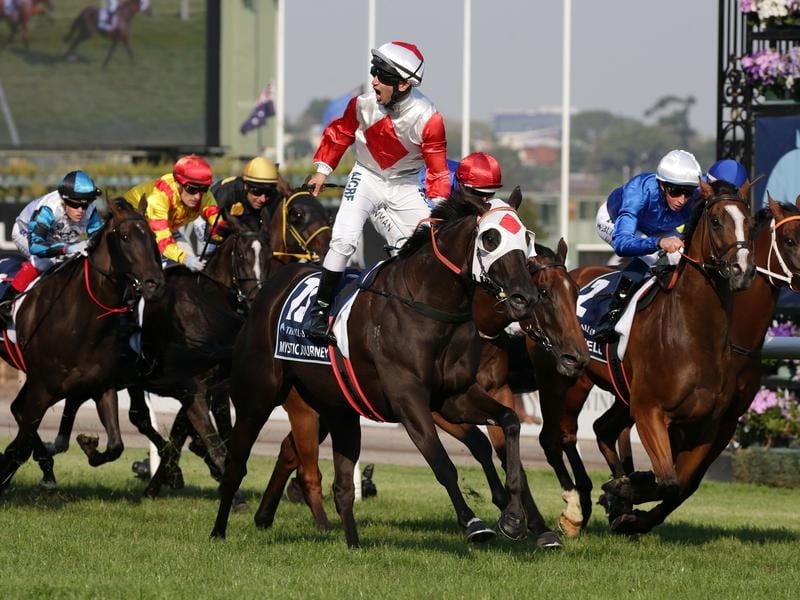 Mystic Journey (red/white) makes her much-anticipated return to racing in the Lawrence Stakes.

Five months after emerging as a new household name in Australian racing with wins in the Group One Australian Guineas and $5 million All-Star Mile, Mystic Journey is set for her racing return at Caulfield.

“The plan has been in place to hopefully get her to the Cox Plate this time around,” Trinder said.

“So this is the start of that road.

“She hasn’t been out of our system the whole time because she spelled at my property and then came straight to the racing stable.

“She’s been straight under our nose and our eye the whole time. It will be good to get her back to the races and give everyone an opportunity to see her. And I trust she’ll do herself and us proud.”

Mystic Journey has 10 wins from 13 starts including victories at her past six.

She is favourite to extend that winning sequence in the Lawrence but Trinder says he would be happy with a top three finish.

“We’re definitely not scared of defeat,” he said.

“We’ve got an objective that we would like to be able to obtain and that’s moving forward to a Cox Plate in October.

“She will take her opportunity. If she runs top three that’s good enough for me.

“You’d obviously like to protect her record, but she has been beaten before.”

Trinder feels Mystic Journey is physically stronger, but whether she has improved time will tell.

“I definitely think that she has come back at least the same level as what she left the autumn. I wouldn’t dare suggest that she’s improved,” he said.

“Her trials have probably been better than what we’ve seen of her in the past. She has run good time so she’s definitely in pretty good order, I trust.”

Trinder had pencilled in the Bletchingly Stakes (1200m) for Mystic Journey’s return on July 27 but decided not to run her on a rain-affected track.

He believes the four-year-old has had a good foundation with a couple of barrier trials to go to 1400m first-up.

Her performance, and more so recovery, will determine if she needs to run in the Memsie Stakes two weeks later.

If she pulls up how the trainer hopes, she would most likely wait four weeks for the Makybe Diva Stakes (1600m).

Hartnell, who Mystic Journey beat in the All-Star Mile, is second favourite for the Lawrence and the horse Trinder fears most.

“He’s a horse that I admire from afar,” he said.

“He’s just a champion. He’s done it in different countries and at different journeys. He’s got a really good record over 1400 at Caulfield, so he’s the benchmark for the race tomorrow.”