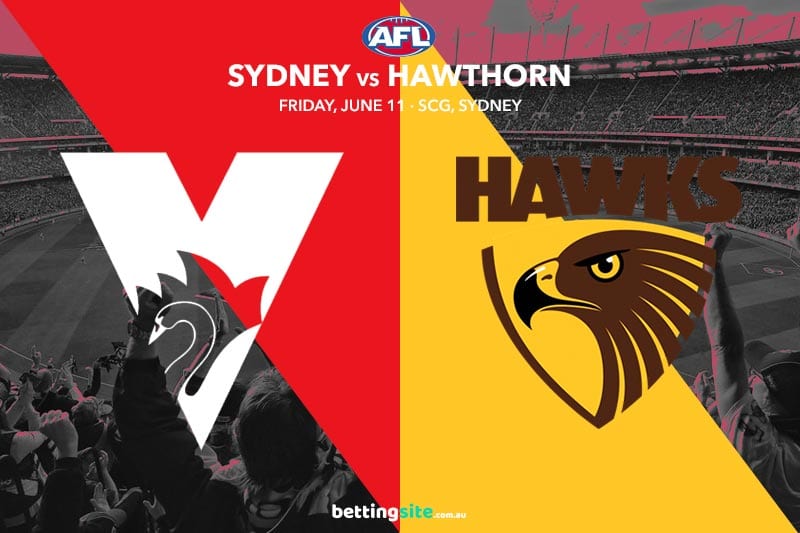 The Sydney Swans will host their old rivals on Friday night as the Hawthorn Hawks make their way to the SCG in round 13 of the 2021 AFL Premiership.

Both clubs finished the 2020 season inside the bottom four with just five wins apiece for the year. The Swans have rebuilt on the run this season and are poised to make the finals, while the Hawks have fallen even lower down the ladder.

Hawthorn fans can expect a few players to be back in the frame for selection this week, as Jaeger O’Meara, Jack Gunston and Will Day were all projected to play after the bye.

Sydney coach John Longmire recently revealed that he plans to rest Chad Warner for this clash, as the second-year midfielder has been carrying a leg injury for the past few rounds.

The Swans have won three of the last four encounters against the Hawks, including two straight victories at the SCG. Alastair Clarkson’s men will be itching for a win after losing their last five matches, but will one week of rest be enough to rejuvenate the young squad?

John Longmire has coached the Swans brilliantly this season, allowing his backline to control the ball and move quickly across the ground. Jake Lloyd has been the architect off half-back, averaging 27.5 disposals per game this year. Lloyd has a great record against the Hawks and is worth a look in the disposal markets.

The biggest attacking threat for the Sydney Swans is normally Lance Franklin, but we think his partner-in-crime will be just as dangerous this week. Tom Papley has kicked eight goals in his last three encounters with the Hawks, including a four-goal performance in shortened time last season which saw the small forward poll three Brownlow Medal votes.

Blake Hardwick has defended very well for the Hawks this season, shutting down his opponents regularly in the back pocket. Hardwick will need to be at his best against Papley, who has kicked a goal in every match this season and is paying $1.80 to kick multiple majors this Friday night.

Sydney Swans to win by 1-39 points

Even though the odds clearly favour the home side, we only see the Swans winning by 1-39 points this week. Sydney looked tired in its scrappy contest against St Kilda, which leads us to believe the team does not have the tenacity to belt the Hawks this week. A well-rested Hawthorn will keep the final margin below 40 points, but we fully expect the Swans to get the job done.

Jake Lloyd to get 30+ disposals

Sydney’s prolific rebounding backman has collected over 30 disposals in three of his last four clashes with the Hawks, while he has posted 25 or more touches in his last 11 matches. Jump on Jake to mop up everything across half-back and tear apart Hawthorn once again.

This round 13 clash between the Swans and Hawks will be won by the home side, with Tom Papley controlling the front half of the ground while Jake Lloyd commands the back flank. You can combine these three legs for a $10.75 return with Sportsbet.