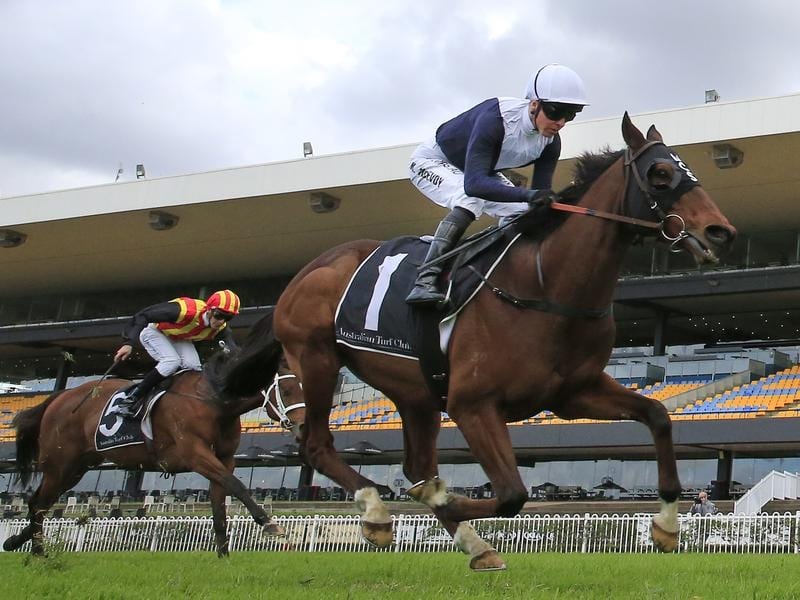 Sweet Thomas continues to plot a hopeful path to the Melbourne Cup in the Flemington Cup 1849.

Sydney trainer Matthew Smith has decided to take up the challenge of inching closer to a Melbourne Cup start sending Sweet Thomas to Melbourne.

A ban is in place for horses having raced in Victoria entering NSW, but that has not deterred Smith who is prepared to leave Sweet Thomas in Melbourne following Saturday’s race.

Sweet Thomas runs in the Flemington Cup 1849, a race that has been staged just once previously, not at Flemington, but in paddocks surrounding the Flemington Inn, just up the road from the now famous course 171 years ago.

The Victoria Racing Club revived the Flemington Cup 1849 (2800m) and will run it on the same program as the Byerley Handicap, which offers the winner of the 1800m two-year-old race a start in either the Derby or Oaks at Flemington later in the year.

Smith trains Sweet Thomas at Warwick Farm, a track which on Wednesday had a meeting called-off because of a spike in COVID-19 cases in the local area.

“We’re allowed out but not allowed back in though,” Smith said.

“We’re trying to keep his rating ticking up and if we can he might sneak into the Melbourne Cup this year with a light weight.

“We only got a couple of points for winning the other day so I thought if we could win another one he would get a few more points and that may get us to where we need to have him.

“It’s not an easy race but it’s the only race around for him, however it might not be far enough.”

It is following the race that Smith is undecided on what to do with the stayer, a last start winner of the Stayer’s Cup (3200m) at Rosehill on June 27.

“He’s due to have some sort of freshen up,” Smith said.

“He might go down the beach, but we’ll work something out for him until it breaks up and we can get him back to the stable.”

Despite the spike in COVID-19 cases in the area taking in the Warwick Farm racecourse, Smith said biosecurity was strict in his stable.

“Our stance is if they’re not feeling well, we tell them to ring in, tell them to go to their doctor to get tested and don’t come in until the results are known,” Smith said.