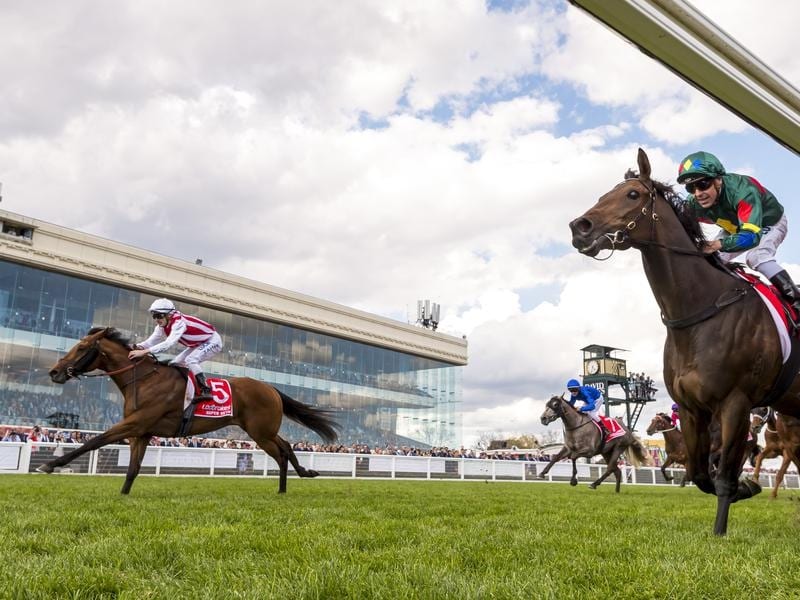 Caulfield Guineas winner Super Seth (l) is building to a return with the major autumn races in mind.

A stronger Super Seth is in the early stages of his build-up towards his next preparation which will be aimed at adding more feature race success to the Caulfield Guineas winner’s CV.

The Anthony Freedman-trained colt capped his spring preparation with a thrilling win in the Group One Caulfield Guineas in October, charging home in the 1600m Classic to grab Queensland gelding Alligator Blood in the final stride.

The David Vandyke-trained Alligator Blood made a winning return at Eagle Farm on Saturday.

Super Seth was given a break after his Guineas triumph and in November New Zealand’s Waikato Stud secured a majority share in the future stallion.

“He has been back in for just over two weeks now so we’re just taking him along nice and slowly,” assistant trainer Sam Freedman said.

“Obviously he’s got to take that step into the autumn but he seems to have strengthened up. He has started some pace work and we’re happy with the way he’s moving.

“We’ll be looking to nail down his autumn targets. The Australian Guineas is an obvious choice and even some of those weight-for-age races like an Orr or Futurity.

“We’ll map out a proper program from him in the coming weeks.”

Freedman said Super Seth had strengthened and put on around 40kg during his break.

“He’s never been an overly big horse but he seems to have really grown into himself now,” he said.

“So hopefully the best is still ahead of him.”

Victoria Derby winner Warning has just returned after a break, with the Australian Derby in April his likely autumn target.

Star sprinter Santa Ana Lane, who finished second in The Everest during the spring, is still spelling after failing to fire in his defence of the Group One VRC Sprint Classic at Flemington last month.

“He’s still in the paddock and we’re giving him until around Christmas so he can have a really good break,” Freedman said.

“There’s no real plan with him yet but we’ll probably go down the TJ Smith path again. He’ll likely have one run before the TJ and go into that second-up.”

Santa Ana Lane was a dominant winner of the Group One TJ Smith Stakes (1200m) at Randwick in April this year.