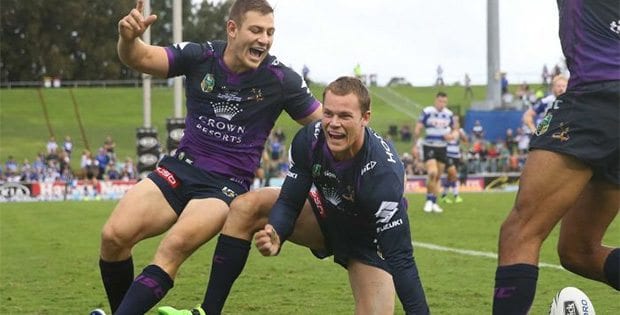 THE Melbourne Storm are the +600 favourites for the NRL Premiership at Sportsbet.com.au after recording a solid six-point victory over Canterbury on Friday night.

The Storm scored two tries in the opening six minutes of the game, but failed to cross the line for the remainder of the match. The 12 points was enough to see off the Bulldogs however, who only scored six points for the entire match.

The only issue for the Storm coming out of the match was a thumb dislocation to important forward Jesse Bromwich.

Bromwich was hopeful it would only be a “2-3 week injury” after scans revealed there was no ligament damage, but coach Craig Bellamy feared the worst after his star player left the field.

“It is a big blow, huge. He didn’t even hesitate to come off,” Bellamy said after Friday night’s game.

“As soon as he was in the tackle, and it was a pretty innocuous tackle it didn’t look like anything, but all of a sudden he was headed for the sideline, which is not like him at all so he knew he’d done some bad damage.”

One of the other firmers on the weekend were the Wests Tigers.

The Tigers were big outsiders against the South Sydney Rabbitohs, but the attacking prowess that they have made their trademark over the last 12 months came to the fore as they piled on 34 points – the highest score of the round – and restricted the Rabbitohs to just 18.

As a consequence the Tigers firmed in to $2.40 to make the finals at Sportsbet.com.au after starting the season as $3.30 outsiders.

The player who did the damage was superstar James Tedesco.

The man they call “Teddy” scored a try and dominated the offensive side of things for his side. The Italian international representative was subsequently wound in to Dally M favouritism at Sportsbet.com.au at the $10 quote alongside Cowboy’s captain Johnathan Thurston and Storm superstar Cooper Cronk.

The big drifters in the market were the Rabbitohs.

South Sydney was expected to be one of the teams that came from outside the finals to make the eight, but after getting smashed by the Tigers and concerns superstar Greg Inglis will not take to the field again after rupturing his ACL, the red and greens have taken a tumble in the futures betting market.

The Rabbits went out to $4 just to make the eight in 2017 and are the third longest team in premiership betting at the $34 mark.