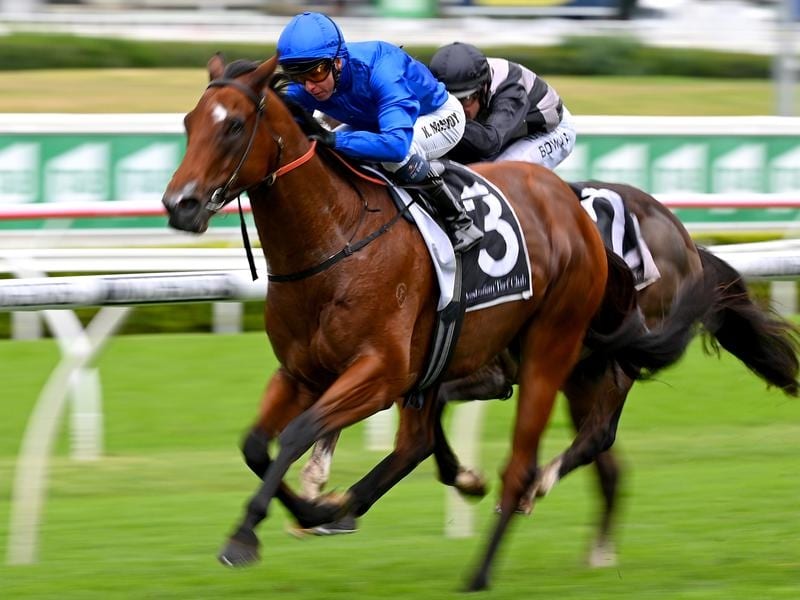 Well-related Coruscate posted the seventh win of his career with a regulation victory at Randwick.

He might not have the talent of his sibling Bivouac but Coruscate has outclassed a depleted field at Randwick to chalk up his seventh win.

A brother to the Group One Newmarket Handicap and Golden Rose winner, Coruscate has relished an interstate switch to win the At Sea Handicap (1100m) at Randwick on Saturday.

In a field reduced to five after scratchings, Coruscate sat outside the leader and in a slowly run race he was able to outsprint Invictus Prince and favourite Southern Lad.

Well beaten first-up at Randwick, Coruscate had managed a top-three finish in a trio of subsequent Melbourne runs.

The decision was made to bring him back to Sydney and despite reservations about his capabilities on heavy ground, Coruscate got the job done.

“His only real blemish was his first-up run here and he was in an awkward spot that day,” Godolphin representative Darren Beadman said.

“Since he’s gone to Melbourne he has got his mojo back and it was a tidy effort today.”

Coruscate gave Kerrin McEvoy a double after he took the opening event on juvenile Peltzer and the top jockey was impressed by the performance.

“Darren (Beadman) said to keep him occupied because he might prick his ears late, which he did at the furlong post, but once he heard them coming he reapplied himself,” McEvoy said.

Invictus Prince, who has never won at less than 1600m and was having his first start in more than a year, made an eye-catching return.

Trainer Matthew Smith said niggling issues had kept the horse away from the races and prompted him to adopt a fresh approach by training him as a sprinter.

“I’ve completely changed the way we have been working him,” Smith said.

“He is so lightly raced and it was encouraging to see him run so well today.”