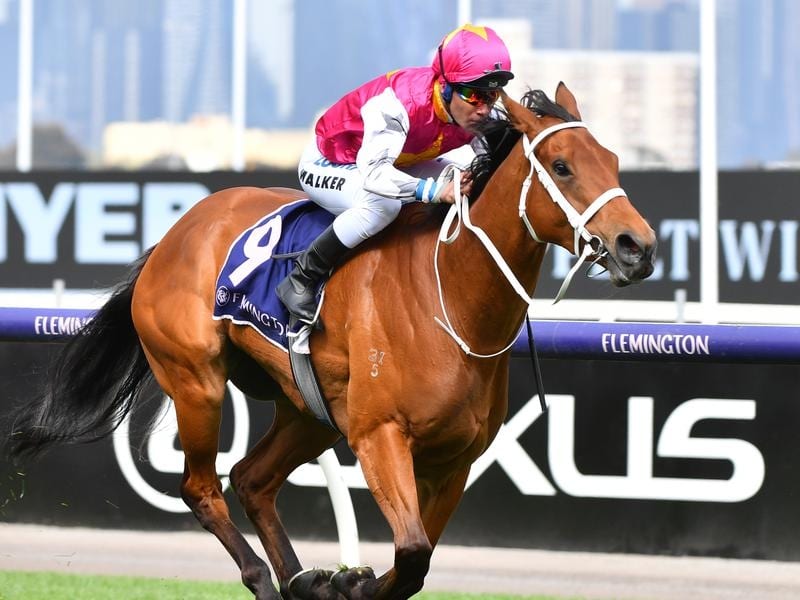 Haut Brion Her has made up for two recent Melbourne defeats to win the Blazer Stakes at Flemington.

After struggling to fully adapt to racing in the anti-clockwise direction in her first two Melbourne appearances, talented mare Haut Brion Her has bounced back to winning ways and shown her class with a dominant performance in the Blazer Stakes at Flemington.

Haut Brion Her stamped herself as a horse on the up with four straight wins in Sydney, racing in the clockwise direction, before trainer Chris Waller sent her south to his Flemington stables.

The four-year-old mare was narrowly beaten by Tofane in her first Melbourne start at The Valley last month before running second again in a 1400m benchmark race for mares at Caulfield.

Having her first attempt in a stakes race in Saturday’s Group Two 1400m event for mares, Haut Brion Her ($5.50) rolled forward to lead before being asked to kick clear by jockey Michael Walker when they straightened from home at the 400m.

Haut Brion Her put a couple of lengths on her rivals and the backmarkers couldn’t get into the race, with runner-up Pohutukawa ($9) closing to within three-quarters of a length on the line while Angelic Ruler ($6.50) was another 1-1/4-lengths away third.

“She didn’t handle Moonee Valley. She laboured around Caulfield and then today at Flemington with a nice sweeping bend and the long straight, it really suited her better,” Waller’s Melbourne stable representative Jo Taylor said.

“She was able to balance up and then finish her race off as well as we know she can.”

Taylor said they would see how Haut Brion Her comes through the Blazer before Waller decides on the immediate plans for the promising mare who has five wins and three seconds from eight starts.

“She certainly ticked a box today getting the job done,” Taylor said.