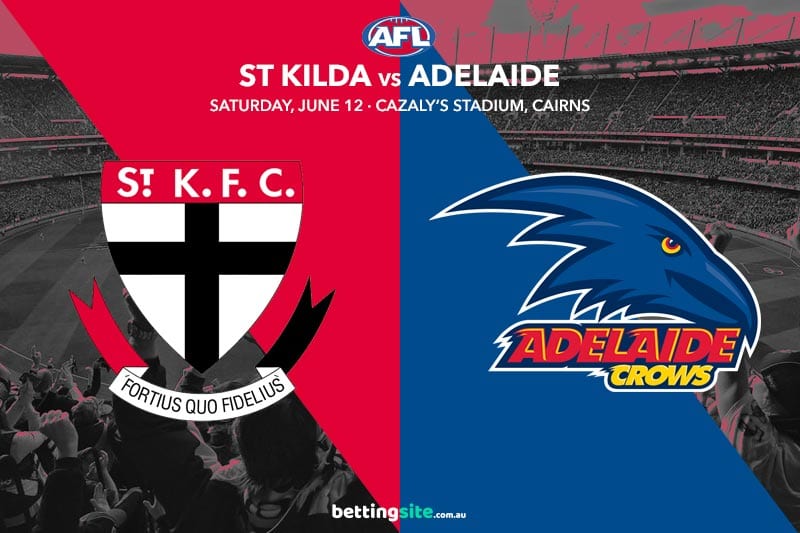 The St Kilda Saints will travel north to face the Adelaide Crows this Saturday night at Cazaly’s Stadium in round 13 of the AFL Premiership season.

Brett Ratten will have over 15 unavailable players coming into this week’s clash, meaning nearly every player available on the Saints list could make the trip to Cairns this weekend.

Jarryn Geary (shoulder) and Mason Wood (hamstring) are set for stints on the sideline, while Seb Ross and Tim Membrey have decided to stay in Victoria to be with their families.

The Crows sent Taylor Walker in for scans on his knee after a knock against the Magpies, but they are confident he will get up for this clash. Sam Berry is expected to return after missing round 12 with concussion.

Both sides have lost three of their last four games and are desperate for a win, which should make for a high-intensity encounter in Cairns.

The Crows have won 10 of the last 11 matchups against the Saints, although the one win for St Kilda came last season at the Adelaide Oval. Matthew Nicks’ men have improved drastically since the 2020 loss, yet they still start as underdogs for Saturday’s match.

Neither team has effectively dried up opposition scoring this season, as the Crows and Saints sit 17th and 16th respectively when it comes to points against. The loose defence from both teams points towards a high-scoring game, so the overs could be the play for the 166.5 total points line at Sportsbet.com.au.

Brad Crouch will face his former teammates for the first time since requesting a trade to the Saints last year. Rory Laird has been fantastic in the midfield this season in Crouch’s former role and comes in fresh off a 40-disposal masterclass against the Pies last week.

Laird is not the only midfielder entering this match in good form, as Crouch is also coming off a 38-disposal performance against the tough Sydney Swans. These two stars will be hard to stop in the middle, so prioritise them both in the disposal markets when making your AFL betting picks this week.

We are taking the underdogs for this contest in Cairns, as the Crows are coming off two very competitive loses against Richmond and Collingwood. The undermanned Saints will not be the same without Tim Membrey up forward, especially while Max King carries a back injury. Back in the Crows to get the chocolates at Cazaly’s Stadium this Saturday.

Taylor Walker could be blamed for the Crows’ five-point loss against the Magpies last week, as the key forward kicked 2.6 on the night. Tex will have his shooting boots on this week against the Saints, who he has slotted 14 goals against in their last four meetings. We expect Walker to redeem himself early by booting the opener.

We cannot look past the Crows this week given how they have played since beating Melbourne in round 10. Walker will be the difference in front of the goals, while Brad Crouch will have a blinder against his old teammates. Combine these three legs together for a $9.75 return at Sportsbet.com.au.