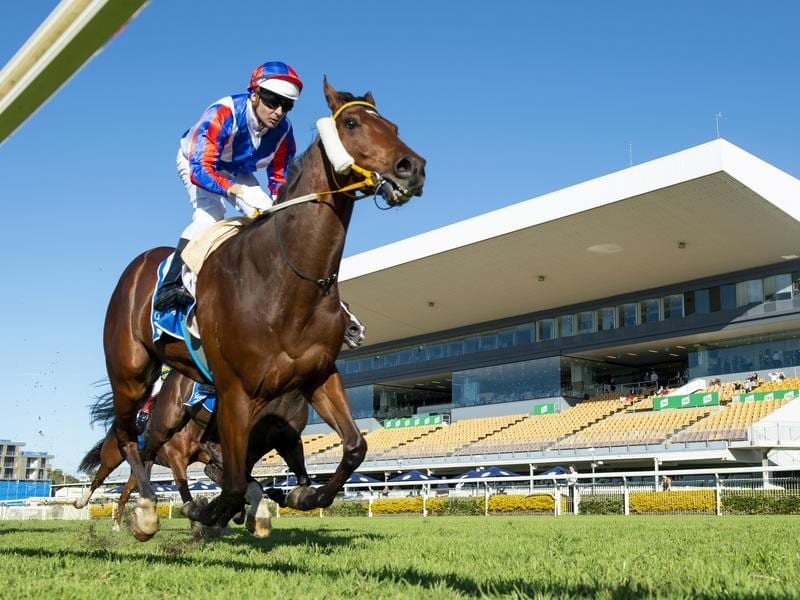 Soxagon could be headed for the Listed Glasshouse Handicap at the Sunshine Coast on July 11.

Promising gelding Soxagon will get his chance in stakes company after his impressive win at Doomben.

Soxagon was entered for the Listed Spear Chief Handicap and the Class 6 but trainer Mark Currie elected to run him in the restricted race.

The four-year-old Soxagon never looked in danger after getting an easy run behind the pace before scoring an impressive win.

It took his record to six wins from 16 starts and three wins and a second this campaign.

Soxagon ran a slick 1 minute 18.94 seconds but it was slower than the 1:18.42 run by Inquiry in winning the Spear Chief.

However, Soxagon was not fully extended which has encouraged connections to consider the Listed Glasshouse Handicap (1400m) at the Sunshine Coast on July 11 for the gelding.

Part owner Brian Burke said provided Soxagon continued to do well he would head to the Sunshine Coast.

“He deserves a crack at something better. The Spear Chief winner ran quicker time than us but Soxagon wasn’t pushed out,” Burke said.

“He ran second to Vega One in The Gateway last year so he isn’t far off the better ones.”

He said another option was the Listed Eye Liner at Ipswich on July 18 but it was over 1200m instead of 1350m this year which might not suit Soxagon.

Burke bred Soxagon and races him with Currie’s wife Donna.

He has had a high opinion of Soxagon since he won his first start by 10 lengths at Toowoomba last year.

One horse Soxagon won’t face in the Glasshouse is Inquiry, who is headed north for races such as the Rockhampton Newmarket and Mackay Newmarket next month.