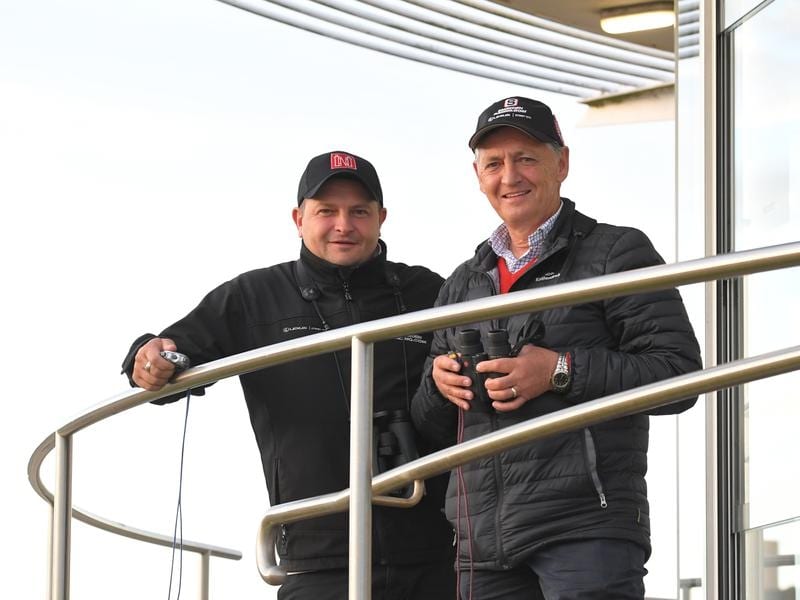 Peter (right) and Paul Snowden will be chasing more success with their juvenile team at Rosehill.

A pair of up-and-coming youngsters will bid to continue the Snowden stable’s run of two-year-old success this season when they go head-to-head at Rosehill.

Peter and Paul Snowden have had a memorable year with their juveniles, highlighted by a brace of Group One wins to King’s Legacy.

While the star colt is on a spring trajectory, stablemates Thudson and Sahra have just begun their respective racing journeys.

The youngsters will both make their Sydney debuts in Saturday’s Darley 2YO Handicap (1100m), Thudson resuming off a Ballarat win in March and Sahra an impressive demolition of her rivals at Kembla Grange.

Peter Snowden is particularly interested to see how Sahra copes with the next level of racing with a view to a potential carnival bid.

“It’s always a big jump from the provincials to Saturday but if she handles it and handles it well, you know you’ve got a nice filly,” Snowden said.

“We might even give her a short break and bring her back in for the spring carnival fillies races if she does run well.”

Thudson is a son of the Snowden-trained Pride Of Dubai, who has made a promising start to his stud career as leading first-season sire.

While Snowden would prefer to run Thudson on a firmer track, he is keen to get the colt’s latest preparation underway.

“His trials have shown he is doing everything right, but his acceleration isn’t as sharp as it was in Melbourne on good ground,” Snowden said.

“He is a nice horse with his share of ability and it’s a good time of year to have him in, as long as he can handle the ground.”

The stable will chase their second black-type win this week with Smartedge in the Listed Winter Stakes (1400m) after collecting another Ramornie Handicap on Wednesday with Signore Fox.

Snowden is happy with Smartedge’s progress and expects him to be competitive as he steps up in distance.

Last-start winner Poetic Charmer and the consistent Charretera round out the Snowden’s Rosehill squad.