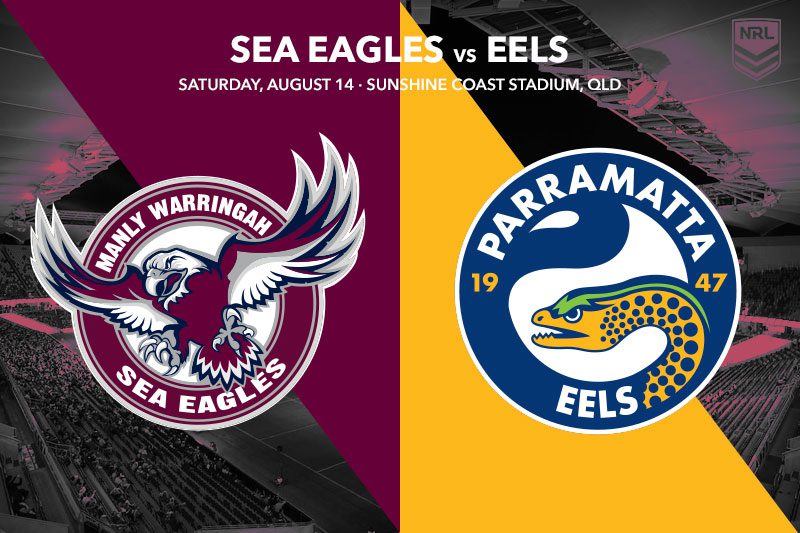 Two great rivals in the Manly Warringah Sea Eagles and Parramatta Eels will clash at Sunshine Coast Stadium to cap off the NRL’s Super Saturday for Round 22. Parramatta come into the game in fourth on the ladder but are at the stunning price of $4.50, while the sixth-placed Sea Eagles are the $1.22 favourite.

The Eels have lost three in a row and were thumped by both the depleted Roosters and the Rabbitohs, and it’s opened up plenty of old scars. They’ve had their roster questioned from top to bottom as well as being reminded of their 35-year premiership drought. On top of all the outside noise, the Eels have lost influential hooker Reed Mahoney for the season with a shoulder injury.

Manly come into this game on the back of a tough 10-point loss to the Storm but, importantly, have no real injury issues. A win for Manly would put them right in the thick of the battle for fourth place, while a loss would almost certainly mean they are playing sudden-death football in week one of the 2021 NRL Finals Series.

If you believe Josh Schuster can have a day out against Parramatta once again, back the whole left edge to score and you should have more joy than misery. Reuben Garrick ($1.57), Brad Parker ($2.30) and the dangerous Tom Trbojevic ($1.45) are always in the frame to score, but especially if Schuster is able to play well. If you combine those three players into a multi, you get a nice $5.25 for your troubles. If you add Jason Saab into that equation, you can get $7.75, and most Manly fans would jump at that price.

The Parramatta Eels have struggled severely to score points in the past three weeks. Without Reed Mahoney at hooker for the rest of the season, it makes turning their fortunes around even harder, and you can’t even guarantee someone like Maika Sivo crossing the line. One can only think Brad Arthur has been trying to put some steel back into his side this week after a poor month, which brings the +14.5 line into the equation. While they may not win, we should expect this Parra side to play for each other at the very least.

Clint Gutherson at $2.63 is probably the best pick when looking for an anytime tryscorer for the Eels. His attitude can never be questioned, and he will swallow up any half-chance to get across the line for his side. Mitchell Moses got on the score sheet last week and is listed as a $6 chance to do so again this week, so can the enigmatic halfback do it again?

Ryan Matterson holds the key to turning around the Eels defence this weekend as the key decision-maker on the right edge. His opposite number, Josh Schuster, tore Parramatta to shreds back in Round 12 with his excellent ball-playing skills for a big man. Schuster was able to attract all the attention of the Eels defensive line on that day to open up space for Tom Trbojevic and Reuben Garrick, so how Matterson organises that edge will play a huge role in whether or not Parramatta can cause the upset.

Taking Parramatta at the line is tempting, but ultimately it is too hard to pass up Manly getting the win and covering the -14.5 line. Their last eight victories all being at the 13+ margin is a reasonably reliable indicator of what we see from them on their good days. The left edge of the Sea Eagles will have a field day again, with at least three tries coming down that side of the field.

Get on Manly at the line, Tom Trbojevic to score two or more, and Jason Saab, Reuben Garrick, Brad Parker and Clint Gutherson all to cross at any time. At $56 with Sportsbet, this should be taken on.