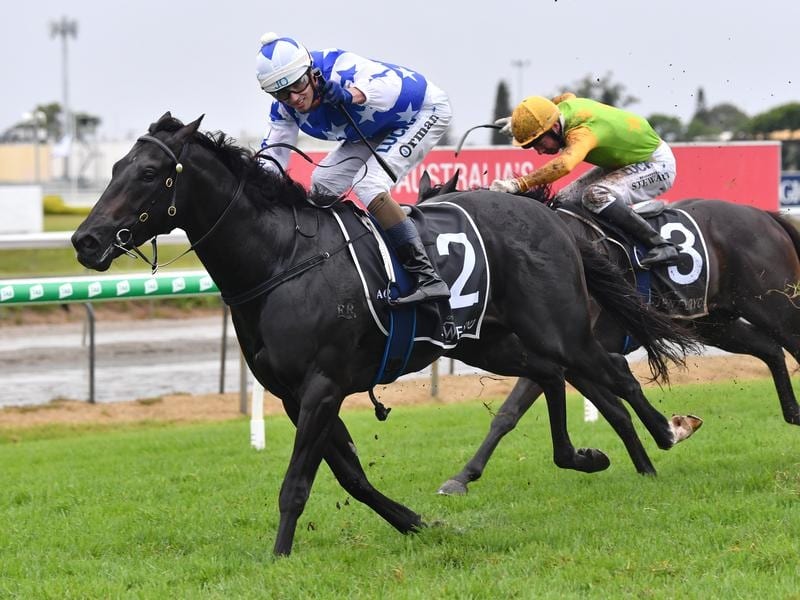 Trainer Kelly Schweida is looking to The Odyssey to return to form fitter and trimmer at Eagle Farm.

In-form trainer Kelly Schweida admits he is walking a tightrope trying to get former top juvenile The Odyssey back to peak form.

Schweida has had a good week with doubles at Eagle Farm and Doomben but would love The Odyssey to return to form in Saturday’s Clayfield College Three-Year-Old Handicap (1000m) at Eagle Farm.

The Odyssey had a great juvenile season being named Queensland Two-Year-Old of the Year at the annual racing awards.

His two runs back as a three-year-old have been fair with a fourth and sixth in races at Doomben.

Schweida said while The Odyssey’s best wins were on wet tracks he did not believe Brisbane’s drought and run of hard tracks had anything to do with the gelding’s two unplaced runs.

“I can sum it up in a word – fat. Basically we nursed him through his two-year-old year from September to March when he won The Jewel at the Gold Coast,” Schweida said.

“We had to give him a good spell and he did very well. He was fat when he got back but you can’t serve it up to these young horses.

“He is gradually getting back to where we want him but you can’t knock these young horses around or you end up with nothing.”

Schweida has a soft spot for The Odyssey who is part owned by his wife Vera and family friends.

“It is a bit like walking a tightrope with him because so much is expected of him,” Schweida said.

The Odyssey has top weight of 59kg on Saturday but Schweida has stuck with senior rider James Orman.

“James has ridden him in all his races bar one when he was committed to Gem Of Scotland,” Schweida said.

“Gem Of Scotland is in the other three-year-old race on Saturday so he gets to ride both. Jim knows The Odyssey very well so there is no need to claim.”

Schweida has a genuine chance of another double at Eagle Farm with Oink chasing a hat-trick in the Class Six (1800m).