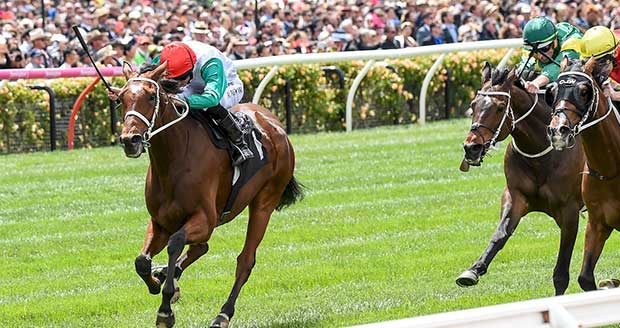 SUPERSTAR English jockey Ryan Moore has got his Melbourne Cup day off to a spectacular start, steering top weighted Kinema ($8.50 at WilliamHill.com.au) to a win in the Prince Of Penzance plate.

The three-time British champion jockey sat back on the Irish import and let the field go about their business, lifting the five-year-old at just the right time to sweep down the outside and pip an unlucky Firenze right on the line.

Four Caret looked fought it out well to finish back in third.

The superstar jockey said while he had never climbed aboard Kinema, he has some familiarity with the horse.

“He’s a horse I know well from England – I’ve never rode him – but I’ve come pretty close to riding him a few times.” Moore said.

Moore said the race panned out perfectly for him.

It worked out well, they went off hard and I was caught behind a wall of horses who were stopping at the top of the straight, but once I pulled him out and got him going he tried hard.

Ryan Moore takes the ride on Bondi Beach in the Melbourne Cup later today, who is $10 on the fixed odds at WilliamHill.com.au, and the 2014 winner said he appreciated trainer Chris Waller giving him the opportunity to see how the track is playing out early in the day.

“It’s nice of Chris and his people to give me a look at the track, and give me a nice ride before the big one.”

Kinema’s trainer Chris Waller was in awe of Ryan Moore in the aftermath of the win.

“It’s a huge piece of satisfaction.”

Waller said that despite sitting at the back of the field and carrying 59.5kg heading into the straight he never thought the horse was out of contention.

“He was a borderline sort of Melbourne Cup horse but we said no. His rating is not where it needs to be to have a fair dinkum crack at the Cup so we knew we had the horse but you needed to pull out something special to win from back there.”

After electing to bypass the Melbourne Cup, Waller believes Kinema is well placed to win the Sydney Cup.

“(We’re looking at) four or five months ahead with the Sydney Cup, which is a great race in itself.”

“It’s (the Sydney Cup) a little bit easier than the Melbourne Cup.”