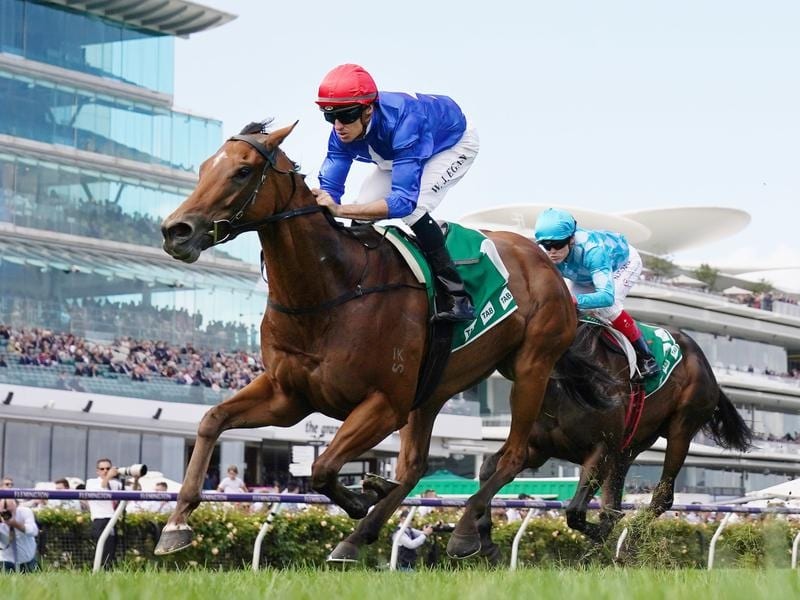 Victorian-trained Rubisaki is an odds-on favourite to make it six wins on end at Randwick.

Rubisaki is poised to start a short-priced favourite in the JHB Carr Stakes at Randwick when she bids to extend an unbeaten sequence this season.

In what is expected to be the Patrick Payne-trained filly’s final start of her campaign, three-year-old Rubisaki is striving to make it six straight wins during the 2019/20 season in Saturday’s Group Three 1400m race against her own age and sex.

“She’s definitely not at the end of her campaign but we’re mindful that we think she’s going to be better as a four and five-year-old,” Payne said.

“And in this race she’s just so well-weighted so it’s just a lovely final race for her.”

After her dominant last-start 1-1/2-length win in the P J Bell Stakes at Randwick on April 4, Rubisaki was the $1.65 favourite on Thursday and has clearly the highest rating among the 11 fillies in the field.

Under the set weights plus penalties conditions she gets in with 57kg, only 3kg over the minimum.

Rubisaki had two wins and two seconds as a two-year-old while her five wins as a three-year-old include the $1 million Inglis 3YO Sprint (1200m) at Warwick Farm, the Group Two Kewney Stakes (1400m) at Flemington and the Group Three P J Bell (1200m) at Randwick.

“She has done a remarkable job,” Payne said.

“She’s still a little bit immature. I would say she’s furnished a lot since her last preparation and that’s why her form is better this time around.”

Because of restrictions on racing participants’ interstate travel during the coronavirus pandemic, Victorian-based Payne sent Rubisaki north just before her PJ Bell Stakes win on April and she is being looked after by Goulburn trainer John Bateman for her two Sydney starts.

Nash Rawiller rode Rubisaki in the PJ Bell and will be aboard again on Saturday.