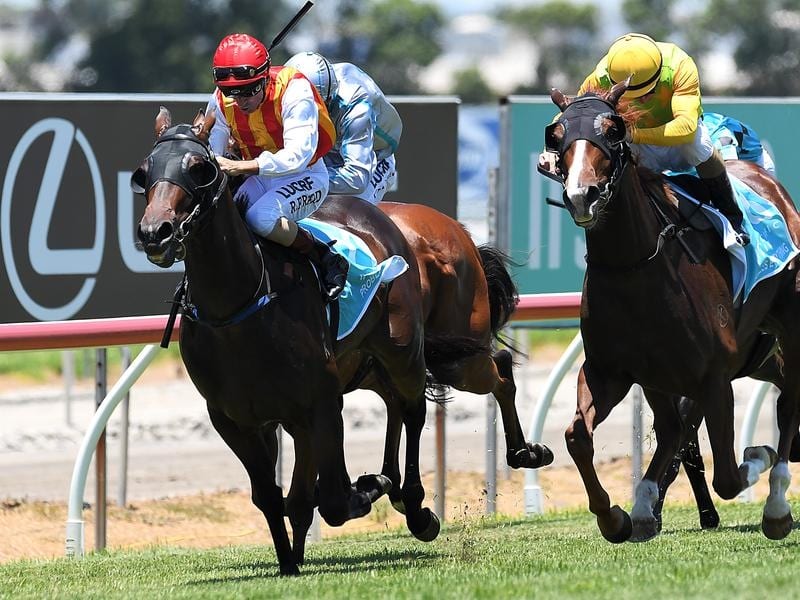 Trainer Gerald Ryan has yet to decide whether Problem Solver (l) will race at Doomben or Rosehill.

Trainer Gerald Ryan has had to farewell talented sprinter Menari for a second time after the horse re-injured the suspensory ligament that forced his first retirement.

One of the leading contenders for last year’s Everest, Menari joined the 2018 stallion roster at Newgate Farm.

He was brought back into work after getting around 20 of the 70 mares he served in foal but will be given another try under careful management by the stud.

“It is such a shame that the suspensory injury happened again,” Ryan said.

The trainer has also lost stable star Trapeze Artist to stud with Widden standing the four-time Group One winner on behalf of his owner Bert Vieira.

As he waits for the next star to emerge, Ryan is concentrating on the horses in his stable yet to prove themselves at a high level.

Among them is Problem Solver who is entered for a 1200m-benchmark 88 at Rosehill on Saturday and a Listed race over the same distance in Brisbane.

Owned by David Raphael, the mare has won two of her 12 starts and been placed a frustrating seven times including a close second to Houtzen in last year’s Group Three P J Bell Stakes.

“I’ll talk it over with David but we might yet take her to Brisbane for the Bright Shadow,” Ryan said.

“It’s a race for fillies and mares so that might suit. We’ll have to study the fields.”

Problem Solver’s two wins have been in Magic Millions races, the $250,000 Maiden at the Gold Coast in January 2018 and the 3YO and 4YO Stakes at the Wyong in December.

Ryan is uncertain whether Albumin will run this week while the stable’s other Rosehill entry, Destiny’s Own, is more likely to race at Warwick Farm on Wednesday.

The feature event at Rosehill is the Lord Mayor’s Cup (2000m) which has received 30 nominations headed by Group One placegetter Big Duke.

His Kris Lees-trained stablemate Sixties Groove is also in the mix with Wagga Cup winner Abdon one of seven entries from the Chris Waller stable.