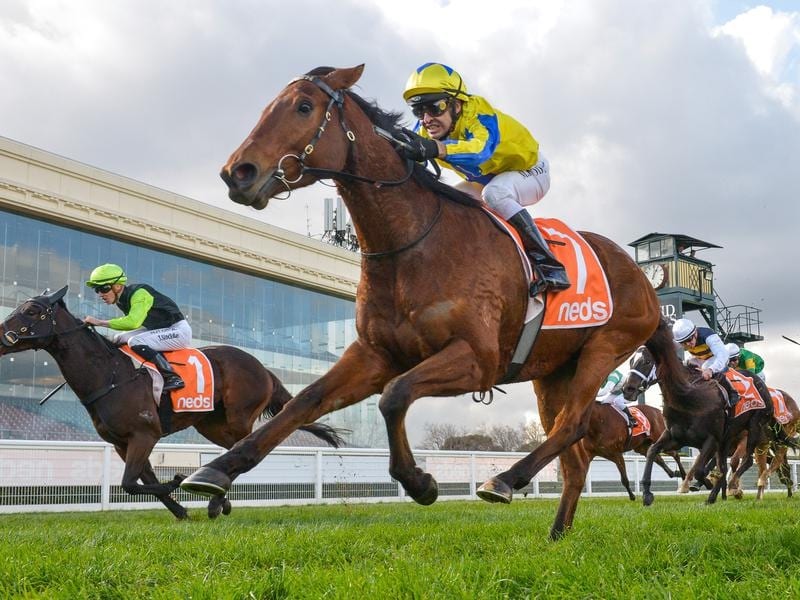 Jockey Michael Rodd has posted his first metropolitan success since returning from Singapore.

Three-year-old gelding Mystery Shot has continued an unbeaten start to his career to give Melbourne Cup-winning jockey Michael Rodd his first city success since his return to Victorian racing from Singapore.

The Lindsey Smith-trained Mystery Shot made it three wins from as many starts in Saturday’s Take It To The Neds Level Handicap (1440m) at Caulfield, settling just behind the lead before striding to the front with 200m to run.

Splendoronthegrass, chasing her third-straight win, charged home from last but could not reel in the $3.30 favourite who scored by a long neck with Scorpius another 1/3-lengths away third.

Rodd had been based in Singapore since 2015 but was one of three Australian jockeys who returned to Victoria to continue riding after racing was shut down for a period in Singapore as a result of the COVID-19 pandemic.

After two weeks quarantine upon his return to Melbourne, Rodd started back at the Flemington meeting on May 23 and notched his first winner back at Hamilton on the Smith-trained Capital Zous a few days later.

He had added another eight winners in the past month before ending the wait for his first city winner since his return with Mystery Shot on Saturday.

“It’s great to finally get one,” Rodd said.

“It’s just taken a bit of time to get on a better quality horse.

“Lindsey and (syndicator) Brad Spicer have been really good to me. They’ve been great supporters and this horse has been going well.”

Rodd, 38, has won some of Australia’s biggest races, highlighted by the 2007 Melbourne Cup on Efficient and the 2008 Cox Plate on Maldivian.

Six of Rodd’s 10 victories since his Victorian return have been on Smith-trained horses.

“He’s a world-class jockey and so professional,” Smith said.