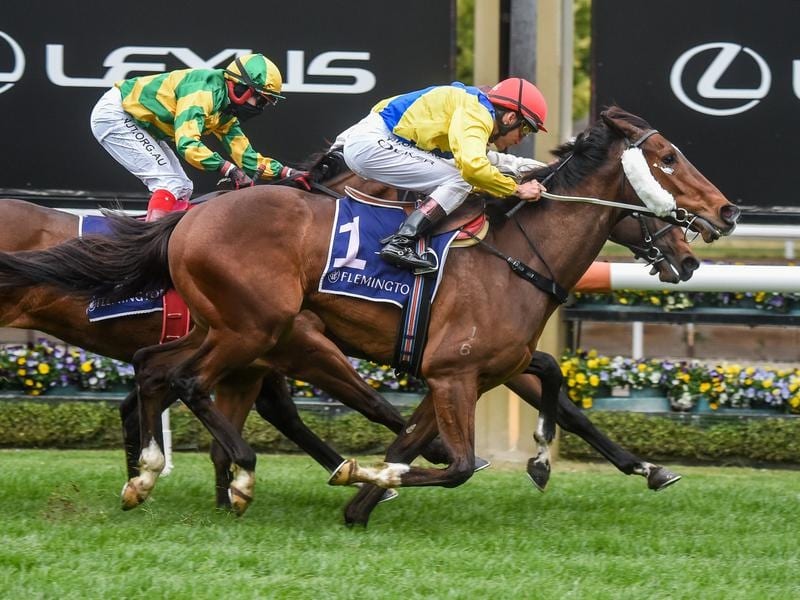 Jockey Damien Oliver says Flemington winner Right You Are has the scope to keep improving.

Progressive three-year-old Right You Are has arrived in time under the urgings of Damien Oliver to score a narrow win under a big weight at Flemington.

Trained by Mick Price and Michael Kent Jr, Right You Are had 62kg in Saturday’s TAB/ATA Trainers’ Trust Handicap (1600m) against his own age and connections stuck with champion jockey Oliver rather than looking to go with a claiming apprentice.

Oliver had Right You Are just in behind the pace and had to be patient in the straight but was able to get the $4.20 favourite through a gap when it presented and then the lightly raced galloper was able to defeat Stretto by a short head.

Kuramae was another short neck away third.

“We spoke before the race and the horse has to be ridden with a sense of timing,” Price said.

“You can’t get it timed much better than that.”

Price said Right You Are, who has four wins and three placings from seven starts, would be given a break before turning attention to his four-year-old season.

Right You Are is by So You Think out of Leica Ding, who won the Geelong Cup in 2009.

Oliver said Right You Are was a quirky horse but had promise and the scope to continue improving.

“It was quite a muddling run race and they jammed up coming to the turn and I was looking for a run,” Oliver said.

“One thing is that he does have acceleration when you need it even with the big weight. There was a narrow gap and lucky he’s a narrow horse to squeeze through.

“A lot of horses struggle in the transition from three to four, but I think he’s one that’s got more scope for improvement.

“Mick has placed him really well through the winter but I still think he’s got room for improvement physically and even ability-wise.”