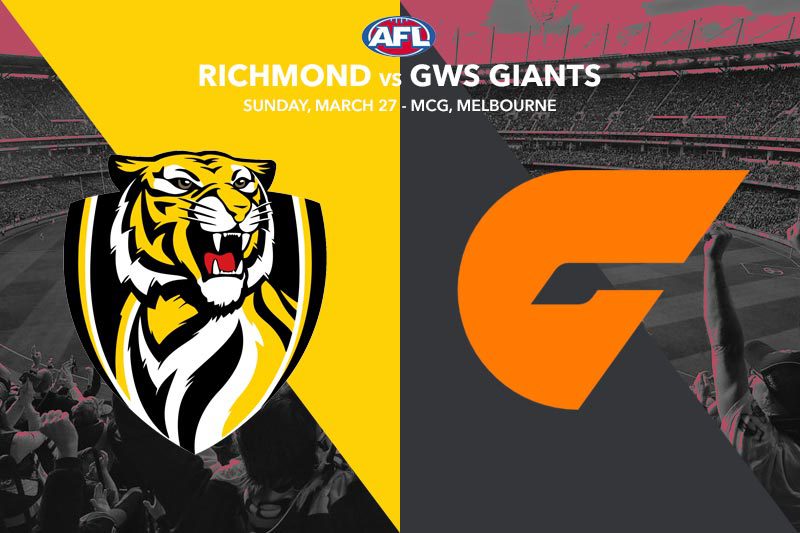 It’s been a while since the Richmond Tigers entered round two of an AFL Premiership season without a win already on the board, but that’s the case this Sunday as they welcome the also-winless GWS Giants to the MCG.

Despite losing to a rejuvenated Carlton side, Richmond delivered a commendable opening performance. That form has since been franked when the Blues overwhelmed the Western Bulldogs on Thursday night at Marvel Stadium. A key aspect of uncovering betting value involves identifying factors that don’t appear on the scoreboard, and Richmond’s round one effort falls into that category. Glancing at the numbers doesn’t tell the whole story, and we still expect the Tigers to have a successful season.

The GWS Giants opened their season with a scrappy loss to Sydney that flattered neither side. Both teams struggled for fluency, and from a future punting perspective, we judged the game as a lowly ranked draw. While GWS have significant upside, we suggest adopting a wait-and-see approach until they produce a solid 2022 performance. Until then, we are happy to bet against the Giants, especially on the road.

With Riewoldt out, the Richmond forward line will need to manufacture a winning score without their key leading target. Shai Bolton showed plenty of dash in round one and booted three goals. Hopefully he can push forward and prove dangerous both on the lead and at ground level. GWS defender Phil Davis was solid against the Swans with 15 disposals and some nice spoils. Bolton and Davis are sure to clash should the Tiger midfielder drift up the ground in search more goals.

Online bookmakers have taken a huge set against the Tigers by installing the Giants as warm favourites. The bagswingers may have overreacted to the round one loss and injuries to Jack Riewoldt (thumb) and Dion Prestia (hamstring), but no doubt the biggest is the potential absence of Dustin Martin on personal leave.

When it comes to extracting punting returns, fortune favours the brave, and we are going to ignore both the round one loss and the absentees and back Richmond straight-up here, currently showing $2.15 on BetOnline. GWS have limited opportunities to play at the MCG, so Richmond’s home ground advantage is easily worth a couple of goals. They have harder bodies, greater squad depth, and we are confident they can beat the Giants.

For value hunters chasing some same-game action, we recommend taking the Tigers to win and Shai Bolton to kick two or more goals. This combo will return a very handy $4.92 on BetOnline. If the Tigers get home as expected, you can expect Bolton to be a key contributor – especially if Dusty Martin doesn’t play.