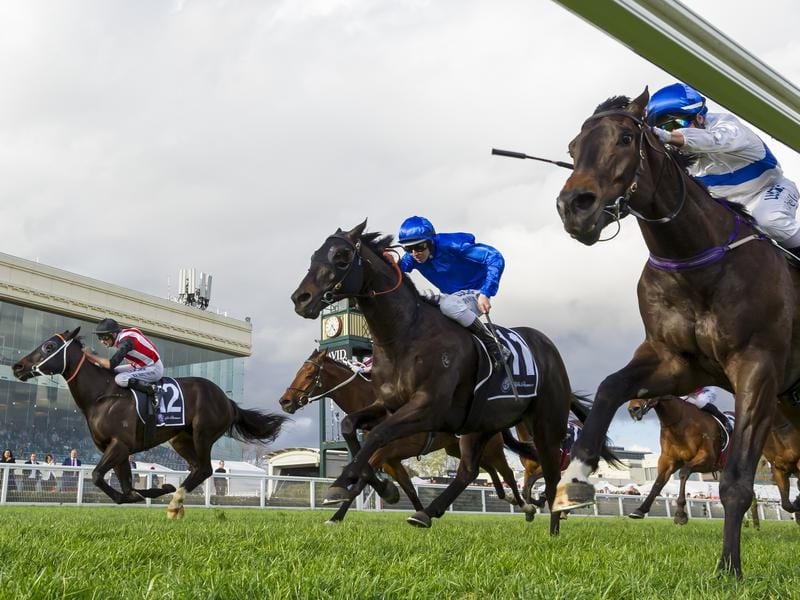 Renewal (L) has grabbed Zoustyle (fence) on the line to win the Testa Rossa Stakes at Caulfield.

The Hawkes Racing-trained Renewal has chased down Queensland visitor Zoustyle to claim a last-stride win in his season return in the Testa Rossa Stakes at Caulfield.

Racing for the first time since May, five-year-old gelding Renewal ($11) came from back in the field under Dwayne Dunn in Sunday’s 1200m-Listed race to grab leader Zoustyle ($5) on the line and score by a half-head.

Godolphin’s Haunted ($6.50) was another nose away third.

The victory was the first at stakes level for Renewal who had finished third in a Listed South Pacific Classic at Randwick in April last year.

Co-trainer Wayne Hawkes said the gelding did a good job to come from back and wide.

“He had a terrible run in transit but the biggest thing was Dwayne didn’t panic,” Hawkes said.

“He just saved it to the last little bit and he hit the line well.”

Zoustyle won his first six races in Queensland before finishing last in a star-studded six-horse field in the Concorde Stakes in Sydney earlier this month before heading to Melbourne.

His trainer Tony Gollan was disappointed Zoustyle had been caught in the final strides but will let the dust settle before deciding the rest of his spring program.

“I guess he was a touch keen down the side but overall it was a good performance,” Gollan said.

“Unfortunately he didn’t get the bob in on the line.

“It’s a big learning curve for him. It’s his first trip away and this was his first time racing the Melbourne way of going.

“I think it’s important if I can just keep him in his right grade I can keep him progressing along.

“We won’t aim too high I don’t think at this stage. And I think if we come back this time next year we’re going to have a bona fide Group One horse.”