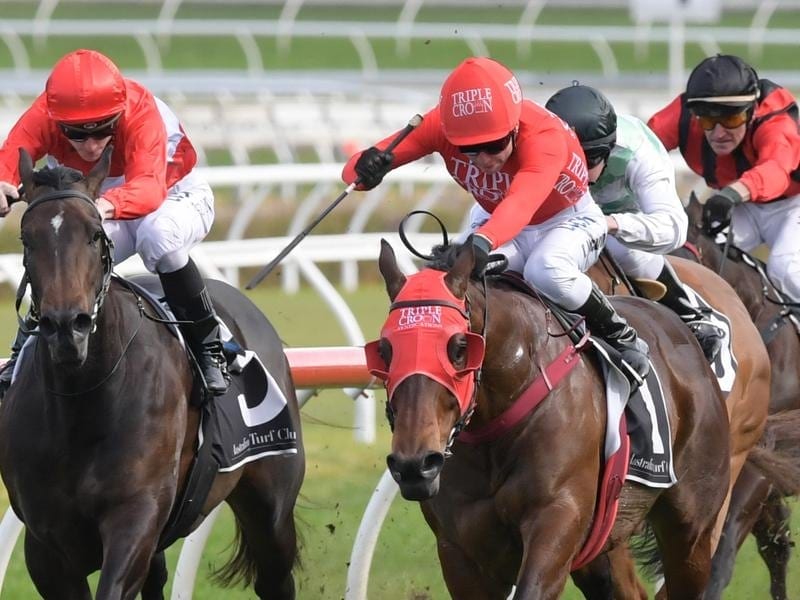 Redzel (right) showed he is on track to defend his Everest crown with a first-up win at Randwick.

Redzel has made an emphatic statement by kicking off his defence of the $13 million Everest with victory in the Group Two Concorde Stakes at Randwick.

His co-trainer Peter Snowden arrived with his lucky charm, grand-daughter Demi, but Redzel, the $2.30 favourite, needed little encouragement to first pick off Invincible Star ($2.35) and hold off the fast-finishing Kaepernick ($21) over the 1000m.

“He is going as well as he was this time last year when he won the Concorde” Snowden said.

“They always have to come back and do it and I’m mindful we’ve got six weeks until the Everest.”

His son and training partner Paul is equally convinced there is more improvement to come from Redzel.

“It’s very satisfying knowing what we have got in front of us,” he said.

“Just watching him parade out the back, it was the first time I’ve seen him break a bit of a sweat pre-race because it shows he’s got a bit left in the tank.

“There is improvement to come, we were confident we had enough to get us by today for the big one in October.”

Redzel will run next in The Shorts, the same race he won in 2017 on his way to The Everest.

“He travelled really well today and topping the rise James (McDonald, Invincible Star) pressed the button on his mare and I was still cruising so I just bided my time but he always had the race in his grasp and he has pulled up well from the run.”

The Gai Waterhouse and Adrian Bott-trained Invincible Star has also confirmed a slot in the Everest with the mare having her first start since her second to Merchant Navy in the 2017 Coolmore Stud Stakes.

“She has had nine months off, taking on the best sprinter, the reigning champion for the Everest.

“Six furlongs (1200m) will suit her because of the tempo.

“She’ll be able to, obviously not get a soft lead in the Everest, but it will be a different tempo to having Redzel breathing down your neck and putting her to the sword.

“She will improve a lot.”