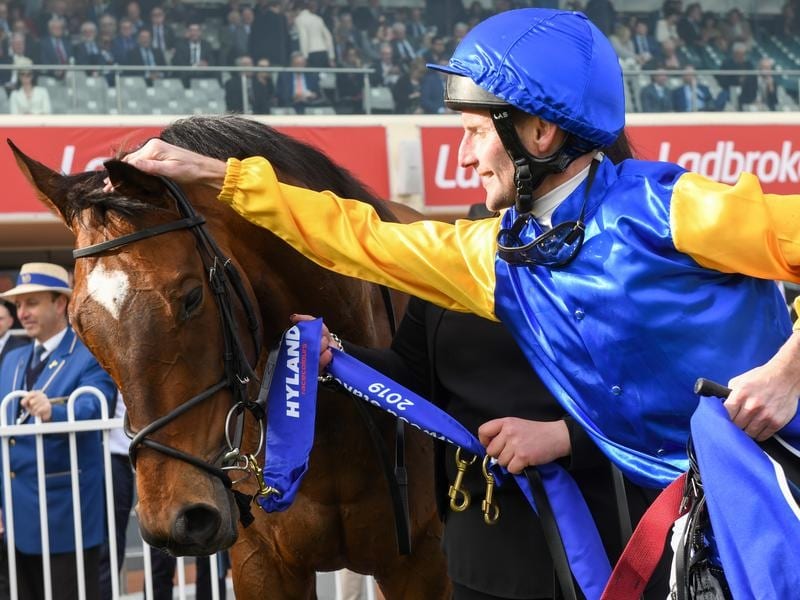 Brad Rawiller has been close to tears after riding veteran Black Heart Bart to an upset G1 win.

Brad Rawiller has won bigger Group One races during his career but admits his victory on comeback galloper Black Heart Bart in the Underwood Stakes ranks among his most satisfying.

Sunday’s Underwood at Caulfield was the jockey’s first Group One success since Black Heart Bart’s previous top-level victory in the Futurity Stakes more than 2-1/2-years ago.

And it was also Rawiller’s first since returning to the saddle in March after almost five months on the sidelines recovering from injuries including fractures to his neck suffered in a race fall at Cranbourne last October.

The former Darren Weir-trained Black Heart Bart was retired last year before his connections decided to give him another go, sending him back into work with trainer Lindsey Smith.

Sunday’s win was Black Heart Bart’s sixth Group One, with Rawiller aboard in all six.

“I’ve won a Golden Slipper and a Caulfield Cup and I never looked like getting teary, and I’m nearly in tears,” Rawiller said.

“I can’t put it into words.

“Since coming back from my broken neck it’s been a long road.

“At the end of the day I haven’t had really much to look forward to as far as rides for the spring went and Black Heart Bart was always just my sole focus.

“I’ve been really happy with how he has been coming along.

“Last week after the Sir Rupert Clarke Stakes when I was asked about him, I said ‘he lit the fire today’.

“But you’ve still got to see it.

“I’m still overwhelmed myself, to be honest, even though I thought he could win today.”

After two unplaced runs since his return, nine-year-old Black Heart Bart was sent out at $101 in the Underwood but he upstaged favourite Homesman to win by a short neck.

Rawiller also paid tribute to the effort put in by foreman Maddie Raymond who formerly worked with Weir and is now with Smith.

“It’s funny, every Group One you’ve just got a reason why it’s your best,” Rawiller said.

The win was soured a little with stewards suspending Rawiller for eight meetings for careless riding at the 350m.