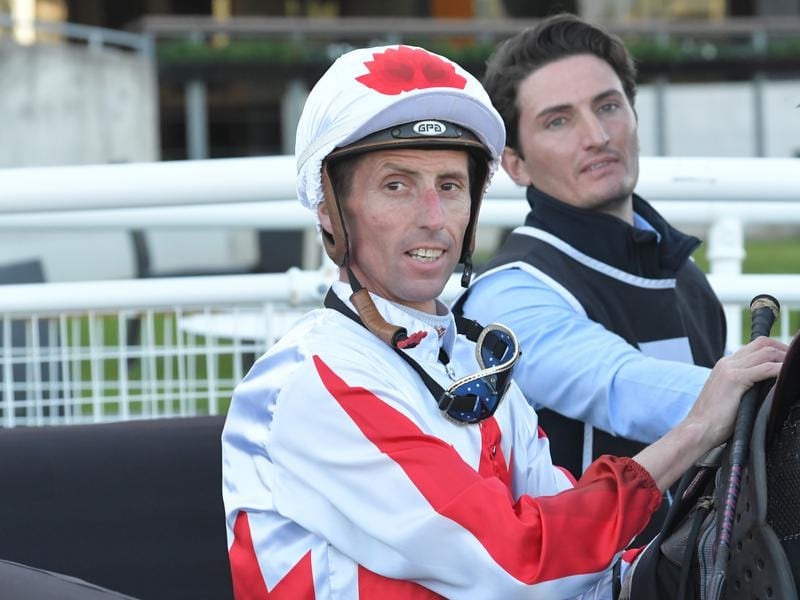 Nash Rawiller is pleased with his prospective Everest mount In Her Time after riding her in a trial.

Comeback jockey Nash Rawiller has confirmed In Her Time will be his mount in the $14 million Everest after riding the mare in a barrier trial at Newcastle.

The Kris Lees-trained Group One winner of the Lightning Stakes, In Her Time had the second trial of her preparation on Monday, finishing second under a hold to stablemate Graff.

Rawiller rode a double at Randwick on Saturday as he builds momentum ahead of the spring carnival after spending 15 months serving a ban from Hong Kong authorities for accepting gifts for tips.

“I came up and gave her a gallop six or eight weeks ago,” Rawiller said.

“I trialled her at Gosford then she trialled again this morning and she’s made really nice improvement.

“She’s still five weeks away from a run,. There’s no rush with her, but every time I’ve ridden her she’s given me a bit more fitness and improvement.

“She’s right where Kris wants her at the moment. She’s right on track.

“The Everest is still a long way away but that’s the plan for me to ride her.”

In Her Time will represent thoroughbred auction house Inglis in the $14 million Everest on October 19 while Graff has yet to secure a slot with four places not yet reserved.

In Her Time ran seventh in last year’s Everest on a heavy track while Graff was fifth after gaining the slot held by Max Whitby and Neil Werrett who had originally selected Menari who was subsequently injured.

Brenton Avdulla rode Graff in the 2018 Everest and was aboard in Monday’s trial.

“He’s come back in good order. Kris took the blinkers off him but he jumped, he travelled, he did everything right.

Graff is set to line up in the Group Three Concorde Stakes (1000m) on September 7 against several Everest contenders including dual winner Redzel who has his second barrier trial this preparation on Tuesday.

In Her Time will be held over until the Group Two Shorts (1100m) on September 21 with Everest favourite Santa Ana Lane also expected to run.