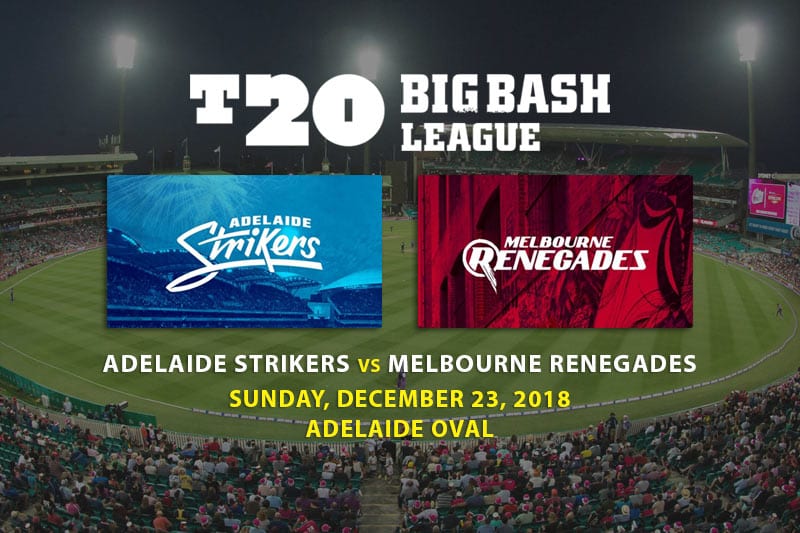 The Strikers should have had them out a lot cheaper than that, but some loose bowling from Ben Laughlin and Michael Neser in the latter overs gave the Brisbane tail enough room to wag.

The chase was no bother, however, with Alex Carey stroking a well-made 70 as Adelaide strolled home with five wickets to spare.

Melbourne Renegades were every bit as good in the field on Thursday as they notched a rare win over Perth Scorchers.

Pakistan’s Usman Shinwari starred on debut, setting the tone with two wickets at 4.25 runs per over in a best-on-ground performance.

Batting was always the big concern with Aaron Finch, Marcus Harris and Beau Webster unavailable, and the home fans were sweating bullets when Perth’s quicks had them 4/17 inside four overs.

The red half of Melbourne prevailed, however, after Sam Harper and Mohammad Nabi added 68 runs for the fifth wicket to put the result beyond doubt.

The Renegades adapted best to a tricky pitch at Docklands, so it remains to be seen what they can do on a truer, more even surface.

Has the T20 Big Bash League ever seen a better bowler?

Khan’s three-for against the Heat took his career tally to 21 wickets in 12 games since joining the competition last year.

An average of 12.8 and strike rate of 13.7 put the young Afghan in the very top bracket of T20 spinners worldwide.

If that isn’t enough to convince you, Khan has finished as Adelaide’s top wicket-taker in each of his last four BBL games.

He is also a three-time Player of the Match winner, so there is plenty of form in that market as well.

But for a lazy spell in the back end of Brisbane’s innings, the Strikers were in complete control at the Gabba.

Even with Travis Head away on international duty, the Adelaide top order of Carey, Weatherald and Ingram contains plenty of firepower.

They also boast the most complete bowling attack in the comp and can expect much better from big quick Billy Stanlake, who took a bit of stick on Wednesday.

The Renegades were excellent in their opening game, but the questions about their batting depth cannot be ignored.

If Cameron White is out early, they are banking on the likes of Christian, Nabi and Wildermuth to get the job done.

Perth’s seamers raised that issue on Thursday night and the Adelaide attack may well drive the point home on Sunday.