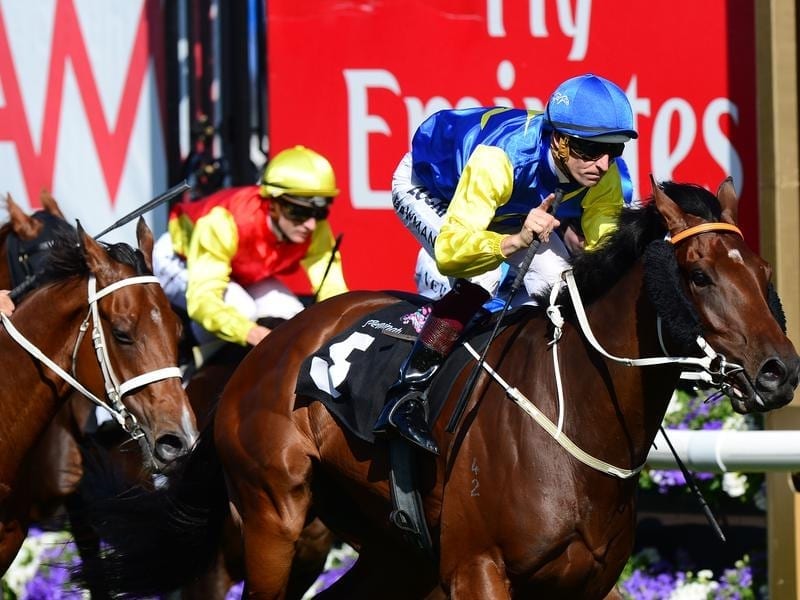 Le Romain will come right into calculations for The Everest if the sprint is run on a heavy track.

Kris Lees is in an enviable position in more ways than one heading into the $13 million Everest.

Lees has three runners, the most of any Everest trainer.

And the Newcastle trainer is also one of the least worried if the world’s richest race on turf is run on a rain-affected track at Randwick on Saturday.

Established wet-tracker Le Romain, Group One-winning mare In Her Time and talented three-year-old Graff will represent the Lees stable in the 12-horse field.

“I think all three horses will be confident in it,” he said.

“You’d like to see a clear day come race day just for all the participants and everyone that’s going but we’ve still got a few days to go.

“I think the track will be affected but I don’t think it will concern my horses.”

Randwick was rated in the soft range on Wednesday morning.

The Bureau of Meteorology says there is a prospect of showers on Thursday and Friday with a 70 per cent chance of rain on Saturday.

Le Romain has some of the best wet-track statistics in the race with six starts in heavy going producing three wins and two placings.

One of those victories came at Group One level in last year’s Canterbury Stakes over 1300m at Randwick.

Graff has won in soft conditions and his only heavy track experience resulted in a Run To The Rose placing at Rosehill last month.

In Her Time hasn’t been seen on ground rated worse than soft when she has won twice.

Other Everest trainers have not shared Lees relaxed approach to the weather.

“We want this weather to just drop off a little bit,” he said.

“Like everyone, we’re a bit concerned if it’s a really heavy track. But a soft track we’re confident he’ll be right there,” he said.

“The rain dampens it a little bit but he’s not completely hopeless on it … he’s just not at his best on it,” Ryan said.

“It is a worry but it’s one of those things you can’t do anything about.”