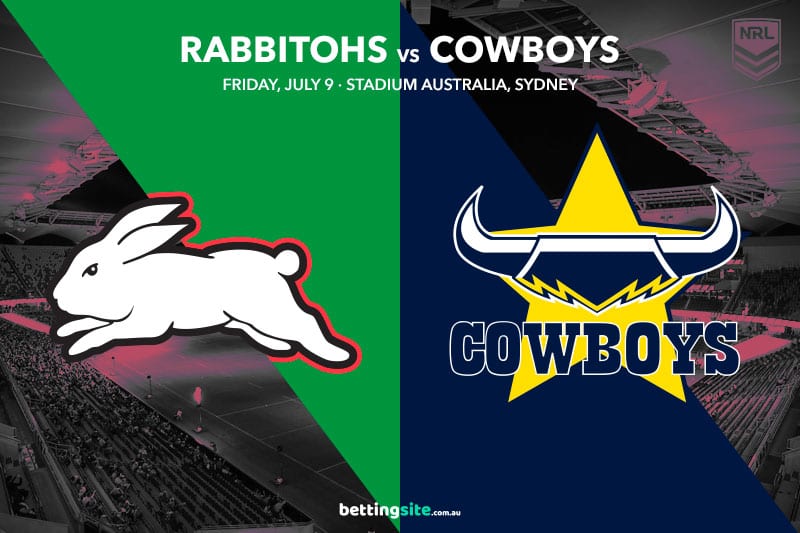 Friday Night Football heads to Stadium Australia as the South Sydney Rabbitohs take on the North Queensland Cowboys in Round 17 of the 2021 NRL Premiership.

Both teams are missing several key players due to State of Origin selection, but Souths fans would still feel reasonably comfortable about getting the result with Adam Reynolds and Cody Walker both being ignored by New South Wales selectors. Dane Gagai, Cameron Murray, Damien Cook and Jai Arrow will all be missing for the Rabbitohs, meaning the great Benji Marshall will have to start the game at dummy half. Even without several big names, they are the $1.18 favourite to secure their fifth straight win.

The Cowboys will once again have to travel and play in Sydney on the same day without head coach Todd Payten, making their preparation less than smooth. They will also be without Hamiso Tabuai-Fidow and Valentine Holmes in their back line and Frank Molo in the forwards, with all three winning selection for Queensland. The Cowboys are on a three-game losing streak after the bye.

Death, taxes and Alex Johnston scoring tries. Yes, we sound like a broken record, but we’d be negligent if we didn’t suggest to back him as an anytime tryscorer at the very least. It almost feels certain he gets more than one. The other back to get on is Campbell Graham, and Keaon Koloamatagi for a bit of value in the forwards might be a place to look. Koloamatagi has just one try this year, so he is overdue.

Even though it will be a cold and dewy night on Friday in Sydney, the 46.5 total points line feels too low. Souths have gone over the line in seven of their last nine games, and they should rack up a score against a Cowboys team who are travelling 2,000km to play on the same day. As usual, the 13+ for the Bunnies is where it’s at.

North Queensland scored zero points against the Knights in their first week of travelling on game day, so what are the odds it happens again? It feels crazy to say a team won’t score for two consecutive games, but the $15 for Souths to win to nil is going to be taken up by some punters who are starting to lose faith in the Cowboys. Their attack barely troubled Newcastle when they had the ball on the goal line, and they lack genuine spark with no Valentine Holmes or Hamiso Tabuai-Fidow.

The +15.5 option would normally be one to look at because Souths have a tendency to take the foot off the gas when they get up by a big margin, but the lack of genuine strike players for North Queensland makes it hard to take them at that line. Reece Robson around the ruck has proven capable of stealing tries, and when Souths are up by 20 or 30 and cool off, he is certainly a good bet to crash over.

There are big names missing from both sides, but fans can still be excited by the prospect of Cody Walker and Scott Drinkwater playing against one another. Both are left-side specialists and make fans hold their breath each time they get the ball, particularly Walker with the attacking strike outside him. Drinkwater’s game mirrors Walker’s in some respects; they both have a good dummy and can get on the outside of a defender, and both are capable of creating points from short kicks. Walker is by far the better player, but Drinkwater has had nice moments this year and can be a genuine excitement machine when he is switched on.

Souths should win in a canter on the back of Adam Reynolds and Cody Walker. They still have enough strike in their side, and their halves elevate the talent of almost anyone who puts on the jersey outside them. Take them at the -15.5 line and you shouldn’t be disappointed.

Rabbitohs -15.5 with Reece Robson to score at any time and Alex Johnston to score a double and the first try of the game pays a hefty $81 at Sportsbet.