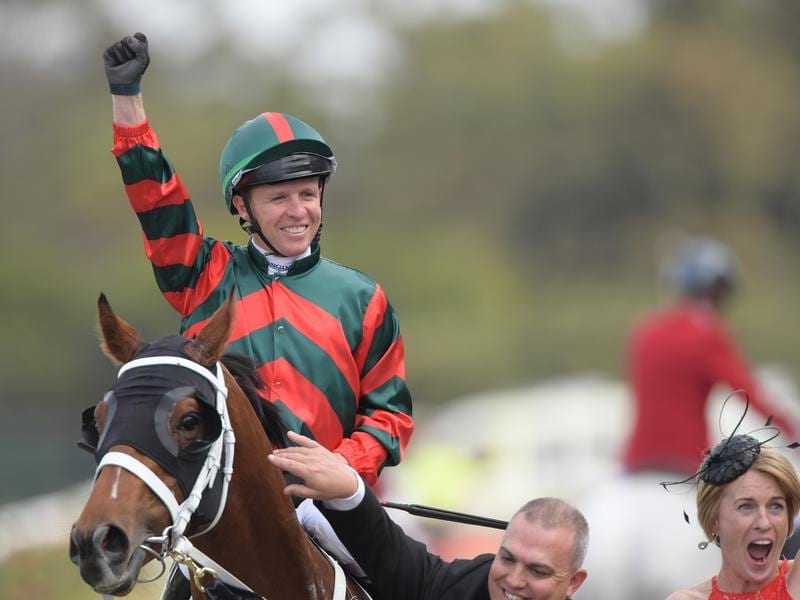 The Autumn Sun has posted his second Group One victory in taking out the $1 million Golden Rose.

The Autumn Sun has staged a stunning last-to-first performance to beat his Chris Waller-trained stablemate Zousain in the $1 million Golden Rose.

Already a Group One winner of the JJ Atkins in June, The Autumn Sun had lost his unbeaten record and Golden Rose favouritism at his previous start when an unlucky third in the Stan Fox Stakes.

From the outside barrier, Kerrin McEvoy took The Autumn Sun (4.40) back in the field and he was still there as the field straightened up for the run home.

Waller admitted he was concentrating on Zousain ($8) who looked the winner with The Autumn Sun winding up down the outside to win by a short neck.

“I thought Zousain was home but I think he might have been beaten by a pretty special one,” Waller said.

“When the draw came out he was 11 of 11 so it wasn’t going to be easy but I’d rather him there because I know how good he is and for him to finish off over the top of a good field it was pretty special.

“He is a Derby horse and the owners are hell-bent on winning a Derby so that obviously comes first and foremost.

“His value however has fortunately skyrocketed again today. He’ll have a price tag now and maybe he can tick the box of winning a Derby as well.”

“I’ll be pushing not to rush him to the spring Derby because it’s so quick. It’s a long way for a young horse.”

The win was the second in the 1400m Group One race for three-year-olds for Waller who trained Zousain’s sire Zoustar to win in 2013.

McEvoy said while the barrier hadn’t helped The Autumn Sun’s cause, blinkers had.

“He was desperately unlucky last start but well played to Chris and the team – they put blinkers on him today.

“He had to do it all. He was still last at the 300 metres but what a powerful engine he’s got. He’s a stunning colt to ride.”

James McDonald rode Zousain and thought he had the race in his keeping.

“I couldn’t hear anything coming but then, The bloody Autumn Sun with blinkers on.”

The favourite Graff ($2.90) finished three-quarters of a length behind the runner-up with his jockey Jason Collett saying he raced keenly.

“He raced really keen,” he said.

“When he quickened he was good but it was a bit short-lived.”

Her jockey Damien Oliver said the Mick Price-trained filly was never in the hunt.

“She was really disappointing,”Oliver said.

“I’m wondering if she is starting to show the effects of a long two-year-old season.”