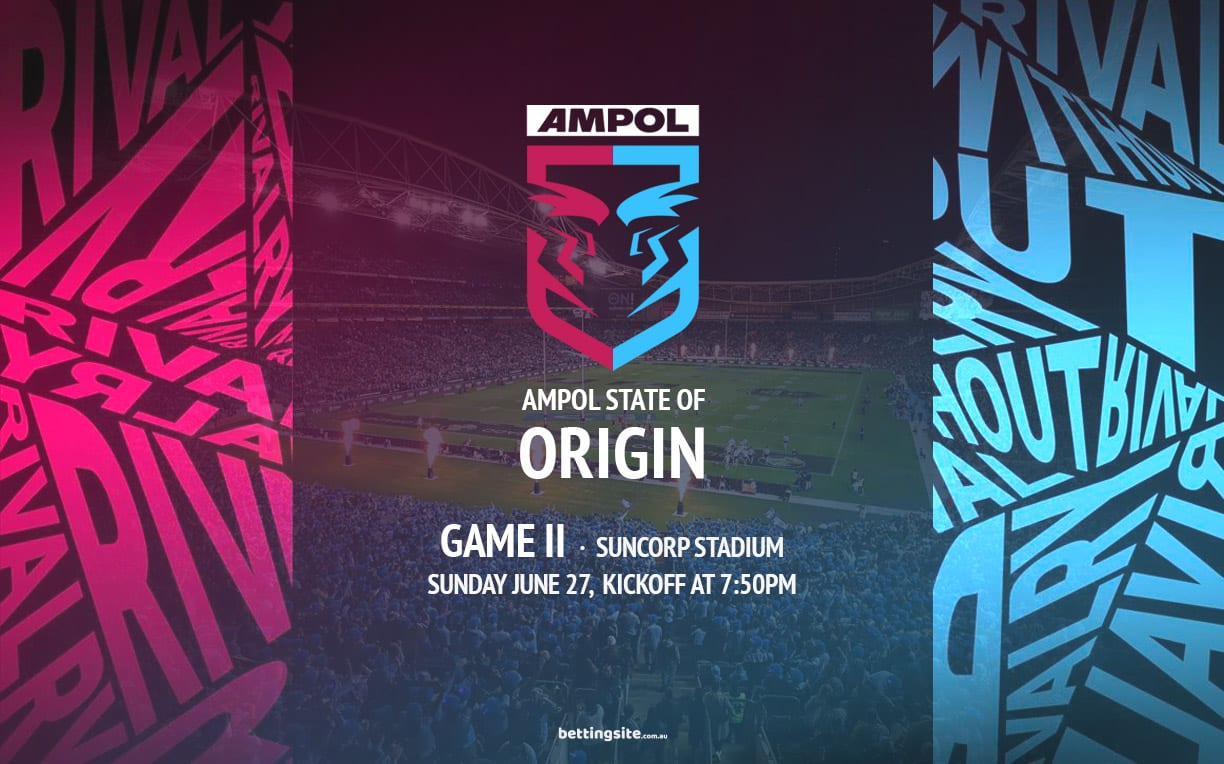 Game II of the State Of Origin Series between Queensland and NSW will get underway on Sunday evening at Suncorp Stadium in Brisbane.

Queensland suffered their heaviest defeat in 40 years just a fortnight ago in Townsville, so they come into the contest as one of the longest outsiders in Origin history at $4.40.

Even though they will stop at nothing to get underdog status, even the Maroons most loyal fans are filled with self-doubt about how they go about stopping the outstanding New South Wales.

The Blues at $1.25 are incredibly short and the punters believe it is going to be another landslide victory, but how can we be so sure? The history of Origin football has been a never-ending tussle with the aggregate scoreline remaining close, so the chances of another Blues’ blowout are slim when you look back over time.

Coach Brad Fittler has won two series as Blues coach, but he has yet to win a game as coach at Suncorp Stadium, so the venue itself is a hard place for any New South Wales team to go and get a win.

Injury and performance have forced the Maroons into several changes as they attempt to save the series. Valentine Holmes’ switch to the wing makes him an attractive any-time try scoring option, but the $13 you can get for him to get the opening try is hard to ignore.

Cameron Munster at the long price of $34 with Sportsbet is another one you need to look at. He has been a nightmare proposition for the Blues on every occasion he has played at Suncorp Stadium, and with a big crowd behind him, he is going to produce a terrific performance ($13 for player of the match if you don’t mind).

The +14.5 line for Queensland almost feels like an insult to 40 years of outstanding Origin tradition, but it shows you just how poor they were in Game I. There is absolutely no chance they are that bad and it will be a tight affair, so take the Maroons at that line.

The points flowed and records were obliterated in Game I, so the prices for the Blues are short on the back of a flood of money. Tom Trbojevic scored the first try in Townsville and is $9.50 to repeat that effort, and when you look at his 2021 body of work, how can you rule him out of another huge performance?

He is $4.50 to score a double and it feels like a case of that being another good option to take. A two-leg multi for both Brian To’o and Josh Addo-Carr to both score can get you a quick $2.40 to boost your return, but don’t ignore Jarome Luai at the tasty price of $4.33. He is $12 to win player of the match, and judging off his fantastic debut, he is going to get plenty of attention from fans having a flutter.

Josh Papalii was missing for Queensland in Origin I and his absence was noticeable. With Lindsay Collins missing and Christian Welch knocked out in the opening exchanges, the Queensland middle forwards were light on and they got blown up by the speed of the Blues. Papalii’s go-forward and steely resolve is going to make going through the middle corridor harder for New South Wales on this occasion, but Junior Paulo as the new starter up front for the Blues is going to feel the brunt of a reinvigorated Queensland pack. Paulo was terrific off the interchange in Game I but the contest was already well on the way to being won, so Paulo’s opening stint is going to go a long way to determining if the Blues can wrap up the series in two games.

New South Wales win the series but it won’t be the procession many think it will be. We think The 1-12 margin at $3.75 is a fantastic price and provides some value in a game that promises plenty.