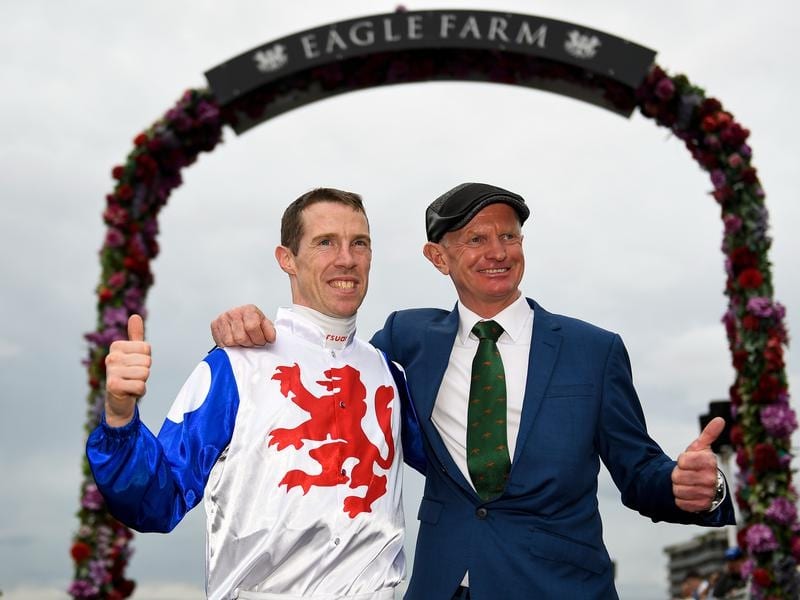 The BRC wants to move the Qld Derby won most recently by Mr Quickie trained by Phillip Stokes (r).

Eagle Farm will host three straight meetings next season with the Kingsford Smith Cup, Oaks and Stradbroke/Derby scheduled to be run in that order.

This year the Oaks was run at Doomben to rest Eagle Farm’s track until it finally settled after a redevelopment.

There is a strong push within the BRC to switch the Derby, won this year by the Phillip Stokes-trained Mr Quickie, to the first of the three days.

BRC chairman Neville Bell noted the Victoria and Australian Derbys were run before the Oaks.

“I don’t want to jump the gun as it is a matter for discussion with Racing Queensland. But it is one way to tweak the carnival,” Bell said.

“It would give us the chance to have three days where we could hang our hats on big name races. Derby Day, Oaks Day, Stradbroke Day.”

The BRC is also keen to get a boost for its Sires’ Produce Stakes which it hopes to get upgraded from Group Two to Group One.

“The Sires’ has produced a string of future Group One winners in recent years. But one way to further boost it would be an even bigger prize money boost,” Bell said.

” It is also one if the things we will be talking with RQ about this month.”

Bell is still keen to get the Stradbroke prize money back to $2 million after it was cut to $1.5 million.

“The race attracted runners from all Australian mainland states and New Zealand so it is still a much sought-after race,” Bell said.

“A $2 million Stradbroke is probably still a while away but something to discuss.