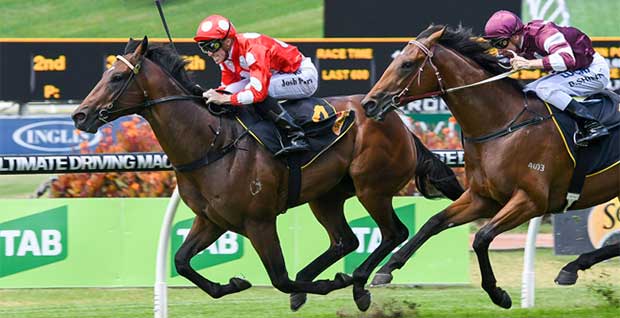 TOP dollar colt Chauffeur has firmed in the Magic Millions two-year-old Classic market after a winning debut at Rosehill on Saturday.

The Gerald Ryan horse is on the fourth line of betting ($13 at Sportsbet.com.au) alongside highly-talented colt Ours To Keep.

Chauffer raced in the first event on the card at Rosehill on Saturday and saluted as the third elect in the market in impressive fashion.

The two-year-old Snitzel product looked to be battling along the fence at the 300 metre mark, but found an extra gear in the final stages to burst away from the field and record a wonderful win in its first outing on track.

Chauffeur – who was purchased for $1.6 million – subsequently shortened in the Magic Millions Two-year-old Classic market, coming in to $13 from the $17 on offer when the markets originally opened.

Two-year-old filly Madeenaty is the best-backed runner at $6.

Trainer David Hayes declared the filly “the real deal” and punters have followed his elect in the market.

Surprisingly, the horse that bested Madeenaty on November 1 at Flemington, Invincible Star, has eased in the market.

Invincible Star made a winning start to its career on the big stage at Flemington as a $15 elect under Joao Moreira, but the I Am Invincible filly has eased out to $7 after beginning at the $6.50 quote.

Sportbet.com.au representative Will Byrne said Chauffer has gained a lot attention after the winning debut and could continue to firm as the Magic Millions roll around in early 2017.

“The money has been for Madeenaty, but Chauffeur has definitely gained a lot of admirers since his win. There is definitely confidence that he won’t be a passenger come Millions day and he’s now the third most popular runner with punters,” Byrne said.