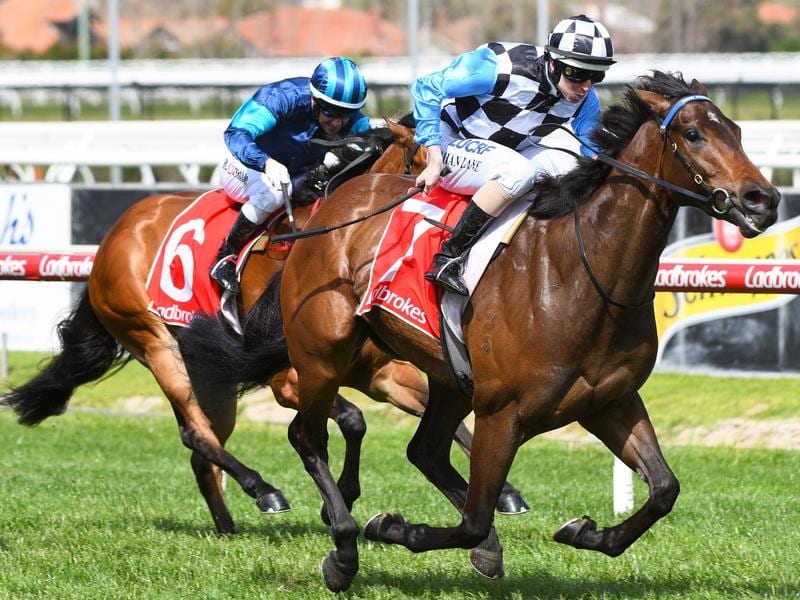 A drop in class has paved the way for Sydney sprinter Prophet’s Thumb to race to a convincing win at Caulfield.

The David Pfieffer-trained mare made her season return in the weight-for-age Group Two McEwen Stakes over 1000 metres at The Valley on September 7.

Despite finishing ninth of the 10 runners she closed strongly to be beaten less than 1-1/2-lengths.

The four-year-old stepped up to 1100 metres in a benchmark-90 race for mares in Sunday’s Ladbrokes Odds Boost Handicap and surged clear under Damian Lane to score by 1-1/4-lengths.

Pfieffer said they did not run along as quickly as he expected at The Valley, but he was pleased how she closed that race off.

“That was good form coming into this,” Pfieffer said.

“A few of the horses out of that McEwen Stakes performed well in the (Group One) Moir on Friday night.”

Pfieffer said the Group Three Northwood Plume Stakes (1200m) for mares at Caulfield on October 12 loomed as the next logical target.

“You’ve got to keep in mind she still holds the 1100-metre track record at Randwick,” Pfieffer said.

Prophet’s Thumb set the mark as a three-year-old filly when she won the Listed Fireball Stakes in March.

“I think the faster the speed, the more of a turn of foot she’s got.

“She was well-rated today. He got off the fence at the right time, exposed her at the top of the straight and she was very good.

“Twelve months ago she was a raw-ability horse that couldn’t put it together. And as a four-year-old, she’s ticking all the boxes now.”