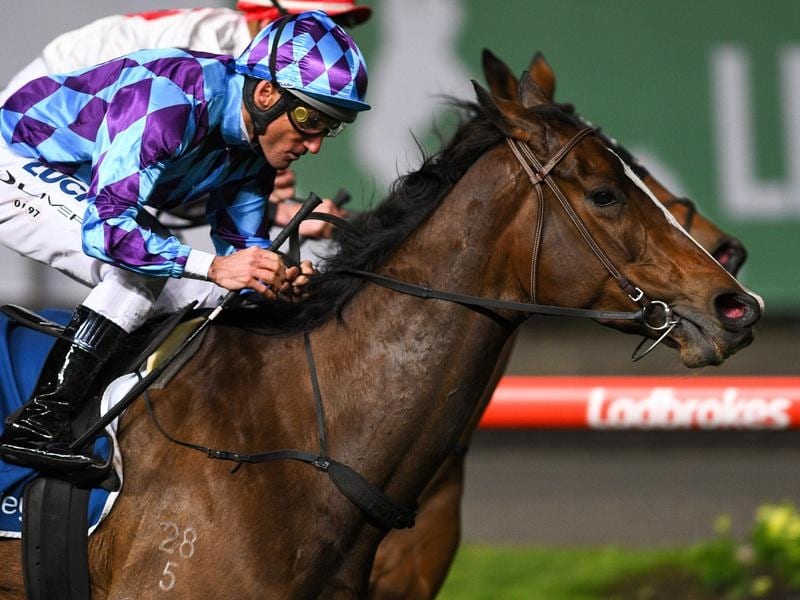 The Cox late beckons if talented mare Princess Jenni can win the Toorak Handicap at Caulfield.

If Princess Jenni wins the Group One Toorak Handicap, a crack at the $5 million Cox Plate could prove irresistible.

The David Brideoake-trained Group One Australasian Oaks winner heads to Saturday’s Toorak (1600m) at Caulfield for the third start of her spring campaign on the back of a win in the Group Two Stocks Stakes for mares at The Valley.

The Toorak will be Princess Jenni’s first race outside fillies or mares company but Brideoake expects the talented four-year-old can make her presence felt in the capacity field with champion jockey Damien Oliver aboard.

“I thought she was very good at The Valley and she’s made good progress from the run,” Brideoake said.

“I think she will run a very good race.”

Brideoake said the Toorak had been in the plans for Princess Jenni, who has won five of her nine starts.

The trainer said he thought the Toorak provided a good lead-up to the Group One Empire Rose Stakes (1600m) for fillies and mares at Flemington on November 2.

But the $5 million weight-for-age Cox Plate (2040m) a week earlier certainly remains on the radar with connections paying up at the third acceptance stage this week.

“It is a temptation because we did keep it live but we won’t make any decision until seeing how we go on Saturday,” Brideoake said.

“All options are open until we see what happens on Saturday.

“We’ll probably make a decision on Sunday as to which way we go.

“If she was to go ahead and win we would have to look at the Cox Plate carefully.”

Princess Jenni is unbeaten in two starts at The Valley, the home of the Cox Plate, in the Group Three Alexandra Stakes in March and last month’s Stocks Stakes.

The winner of the Toorak will also be eligible for a $1 million bonus if they go on to win the Cox Plate.

In an open market, Princess Jenni was challenging for favouritism for the Toorak on Thursday at $7, just behind Sir Rupert Clarke Stakes runner-up Age Of Chivalry at $6.50.