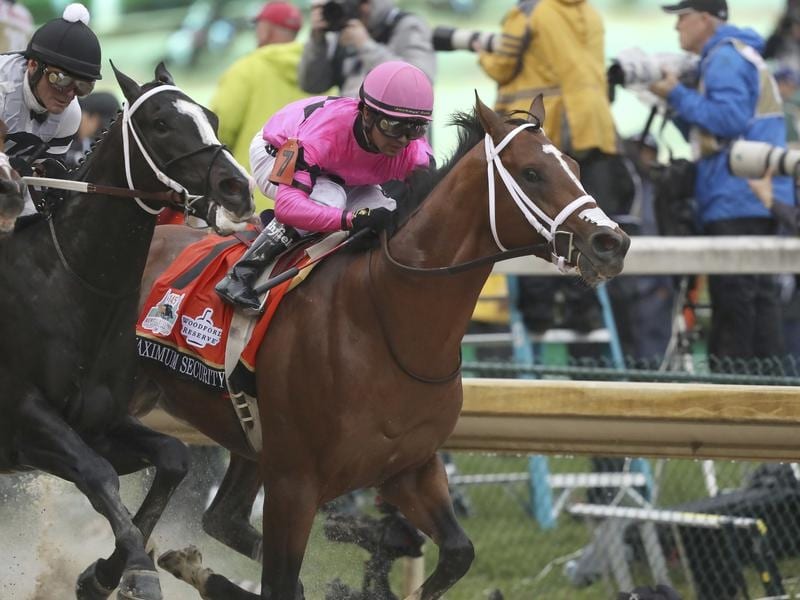 Ownerf of Maximum Security’ (r) will consider an appeal against his Kentucky Derby disqualification.

Maximum Security’s owner Gary West is unsure whether the colt will run in the Preakness Stakes as he ponders an appeal against his disqualification as the winner of the Kentucky Derby.

West says he realises the appeals process could extend well beyond the second leg of the Triple Crown at Pimlico in Baltimore on May 18.

“When you’re not going for the Triple Crown, sometimes it doesn’t make sense to wheel the horse back in two weeks,” West told the Associated Press.

“If there’s going to be an appeal it will almost certainly be before the Preakness, but appeals historically take some time to sort out. Win, lose or draw, we’re not going to know the outcome of that until probably months, if not years, down the road.”

Maximum Security was first to finish Saturday’s muddy Derby before becoming the marquee race’s first winner to be disqualified for interference.

Stewards elevated runner-up Country House, a 65-1 long shot, to the winner’s circle after determining Maximum Security impeded his path and two others’ exiting the final turn.

Maximum Security was ultimately demoted to 17th of 19 horses after starting as the 9-2 second-elect.

Stewards cited a section of the rule that calls for disqualification if “a leading horse or any other horse in a race swerves or is ridden to either side so as to interfere with, intimidate, or impede any other horse or jockey.”

Chief steward Barbara Borden said in a news conference she and two other stewards interviewed riders and studied video replays of the incident during a 22-minute review after the finish.

West said the earliest he could see the stewards’ video evidence would be Thursday, which could determine if he files an appeal in a process he was still trying to understand.

“We wanted to have the stewards explain to us what they saw and show us on their video the pictures of exactly what they saw, and they refused to allow us to do that,” he said.

“That was really pretty bush league, because there is no rule that they can’t show the film to the owner and trainer that got disqualified for the first time in the history of the Kentucky Derby other than they aren’t working today, or Monday, or Tuesday or Wednesday.”

President Donald Trump blasted Maximum Security’s disqualification, blaming the Derby outcome on “political correctness.””The Kentucky Derby decision was not a good one,” Trump tweeted. “It was a rough and tumble race on a wet and sloppy track, actually, a beautiful thing to watch.

“Only in these days of political correctness could such an overturn occur. The best horse did NOT win the Kentucky Derby – not even close!”