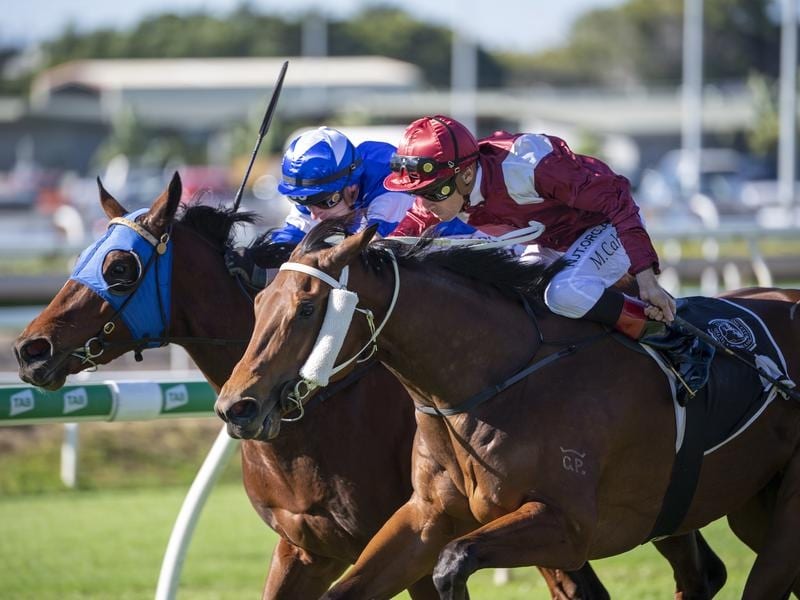 Plutocrat (outside) made the most of an inside to win the Tattersall’s Club Stakes at Eagle Farm.

Trainer Chris Anderson has been saying for months the day his filly Plutocrat drew a decent barrier she would win a good race.

Anderson said at her first four starts Plutocrat had drawn virtually on the outside of the field.

He was thrilled when Plutocrat drew barrier one on Saturday as he was able to instruct jockey Michael Cahill to ride her on the pace.

“It was a testament that she had won a race and was beaten a nose in a stakes race because we had to ride her upside down back in the field,” Anderson said.

“When she drew barrier one she was set to get the run of the race and show what she can do.”

A $110,000 Magic Millions buy Plutocrat was the first winner for sire Rich Enuff and is now his first stakes winner.

“She is raced by the Glenlogan Park stud and with a stakes win now will be even more valuable at stud,” Anderson said.

“But first I am really looking forward to her as a three year old where she will get out to 1600m.

Anderson said Plutocrat would spell and either come back for the spring or Magic Millions carnival.

Cahill completed a winning treble on Plutocrat and said the filly had a bright future.

“She jumped really well and got into a lovely position. It was then a matter of getting out,” he said.

James Orman said Zero To Hundred did a good job at only her second race start.

Handy sprinter Royal Witness is set to return to his original trainer Joe Pride in Sydney after winning the 4 Pines Handicap (1000m).

Royal Witness, who hadn’t won since scoring at Randwick in September, has been with the Toby and Trent Edmonds partnership at the Gold Coast for the winter.

“He has been consistent without winning up here. There isn’t much between the open company horses up here and the one that wins usually gets the luck,” Toby Edmonds said.

“He will go back to Joe now and come back next winter.”