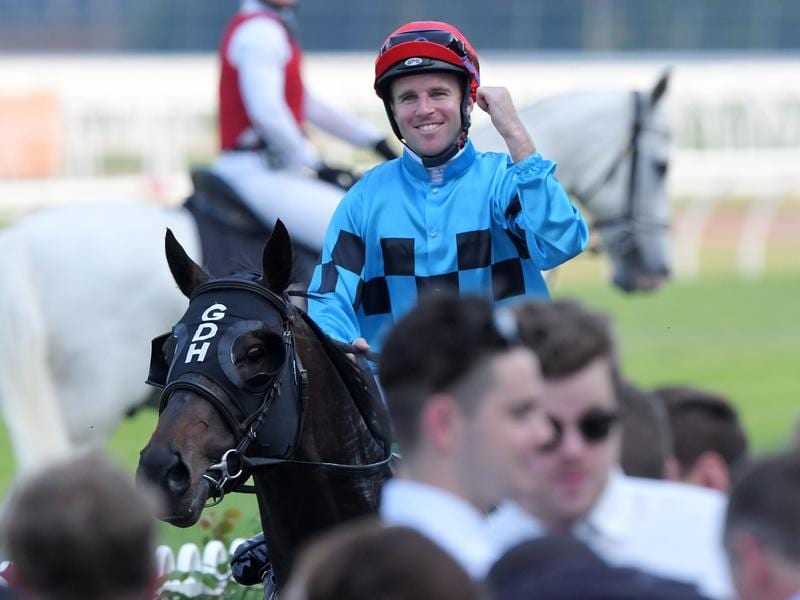 Pierata has boosted his reputation as a topline sprinter with his win in the Redzel Stakes.

Piereta has outclassed the $1 million Redzel Stakes field to bank a mega bonus for his Rosehill win.

Sent out the $2.40 favourite, the Greg Hickman-trained sprinter went the long way home to score by a length over Trekking ($5.50) who lunged late with Le Romain ($26) a short-head third.

Saturday’s victory takes Pierata’s career earnings close to $5 million, with the $580,000 winner’s cheque bolstered by a $750,000 bonus as an Everest runner.

“We ran super in the Everest and today was probably just a little consolation,” Hickman told AAP.

Hickman had signalled Pierata would be ridden forward by Tommy Berry from his wide gate (11).

He jumped well but was caught three-wide without cover for much of the 1300m.

It was a situation Berry had envisioned pre-race, but counted for nothing as Pierata stoked up to burst clear.

“I just trusted him. I knew he was the best horse in the race,” Berry said.

“I said to the connections and Greg just before I got in ‘worst-case scenario we’ll be three wide and if we are we’ll just have to cop our medicine, believe he’s the best horse in the race and get the job done.

“Gee didn’t he pin his ears back.”

Hickman admitted he thought he had pulled the wrong rein for a brief moment.

“I thought we were in a little bit of trouble there for a little bit when he hit that low patch,” Hickman said.

“You could see them all coming. But he just dug deep and he knew I needed the doh ray me.

“The bloke’s a little battler.”

It was Pierata’s first triumph in the Aquis Farm silks.

“To have Aquis colours on for the first time and to win for them, it’s pretty special,” he said.

“It’s been an amazing ride and he’s been amazing horse. Hopefully he’ll do a good job at stud.

“He’s been a wonderful horse to work with and go along with his career.”

Although the jubilant post-race scenes were reminiscent of a retirement party, Hickman said he would sit down with Aquis representatives before mapping out their next step.

His jockey said it would be only right for the Warwick Farm horseman to hold onto the dual Group One winner for a little longer.

“He deserves a good horse and he should have this fellow until the breeding season next year. I’m just rapt for him.”