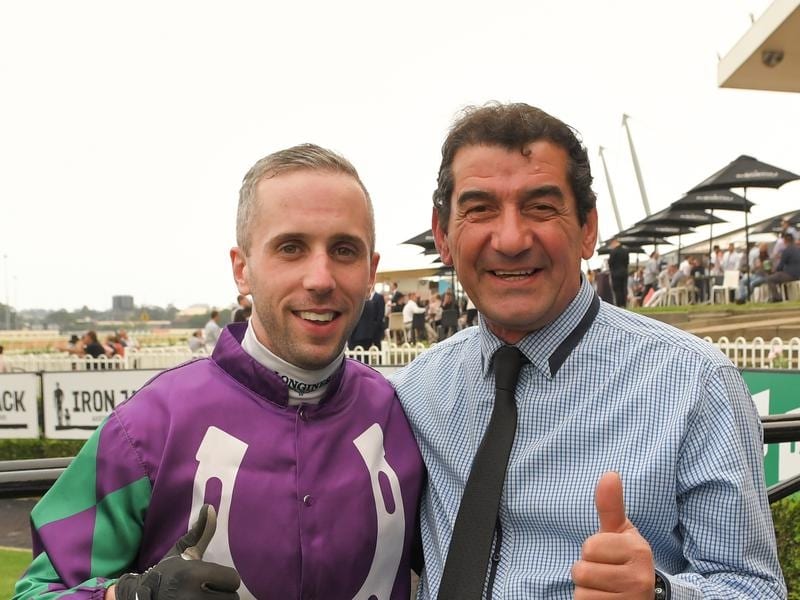 Jockey Brenton Avdulla has teamed up with trainer Gratz Vella for a Rosehill win with Stephan.

The patience and persistence of Canberra trainer Gratz Vella is finally being rewarded with Stephan, who has notched back-to-back wins at Rosehill.

The seven-year-old was lining up for just his 17th start in Saturday’s Elderton Homes Made. You Look Sprint (1100m) and for Vella and his owners, it has been quite a ride.

Vella knew the horse had ability but Stephan also had a knack for finding trouble.

“As a two-year-old he ran third at a Canberra Cup meeting and then he went shin sore and from there on he was just problems,” Vella said.

“Over the years he has had an eye problem.

“One day we found him in a paddock and he had a stick stuck in his chest.

“He also reared over backwards and broke his wither.

“Then he had to have 12 months off because he did his fetlock in.

Vella conceded Stephan’s owners lost faith in ever getting the horse back and racing consistently but the trainer persuaded them to persist.

“The owner surrendered. She said ‘no way” but I said ‘we’ve got to bring him back’,”Vella said.

Stephan ($7.50) raced handier to the speed than most anticipated but it proved a winning move by Brenton Avdulla, who sooled him between runners to score by a half-length over $2.90 favourite Invictus Salute.

Taniko ($11) was the same margin away third.

The win capped a memorable week for Avdulla, who became a father for the first time when his wife Taylor gave birth to a boy, Hunter, on Sunday.