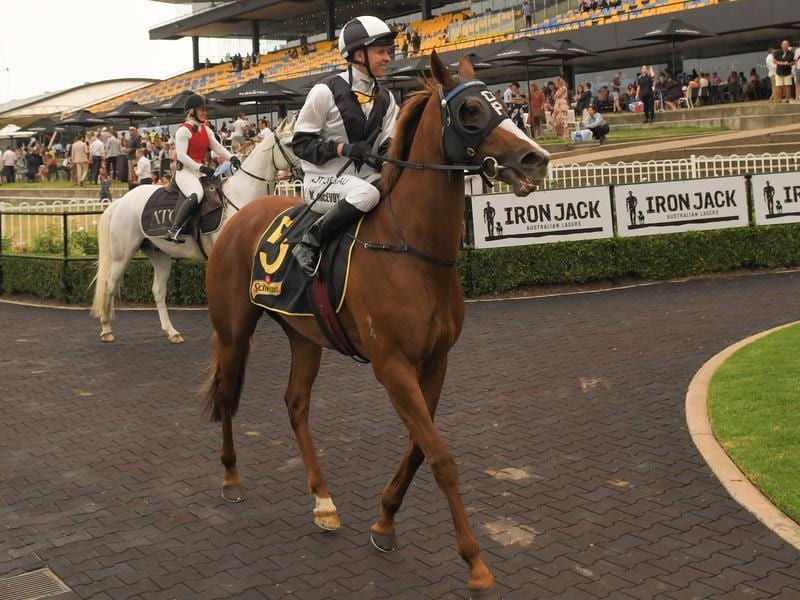 The Party Girl has upstaged her more-fancied rivals to win at Rosehill.

A race that looked as if it would not pan out for The Party Girl has turned out to be the ideal platform for the backmarker to score a confidence-boosting win.

Burning Crown appeared to be the only natural front runner in Saturday’s Schweppes Handicap (1200m) at Rosehill and that is how most punters read it, sending the horse out an odds-on favourite.

But Nash Rawiller on Echo Jet had other ideas and spurred on by the addition of blinkers, Echo Jet took on Burning Crown and took up the lead.

It brought about the undoing of the favourite, who weakened out of the placings, but proved an unexpected boon for the David Pfieffer-trained The Party Girl.

Like most punters, Pfieffer feared The Party Girl would not get the race run to suit.

“I was worried there wasn’t going to be enough speed,” Pfieffer said.

“But they went a hundred mile an hour so it worked out really good for her.

“She obviously got run off her feet early and she was lucky to keep in touch with them but the concluding stages were set right up for her.”

Giving Kerrin McEvoy his second win of the afternoon after he scored aboard Guise, The Party Girl ($26) stormed down the outside to beat Poetic Charmer ($4) by three-quarters of a length with Echo Jet ($10) holding on for third.

Pfieffer confirmed the winner would head to the Gold Coast for the $1 million Magic Millions Fillies and Mares (1300m) on January 11.