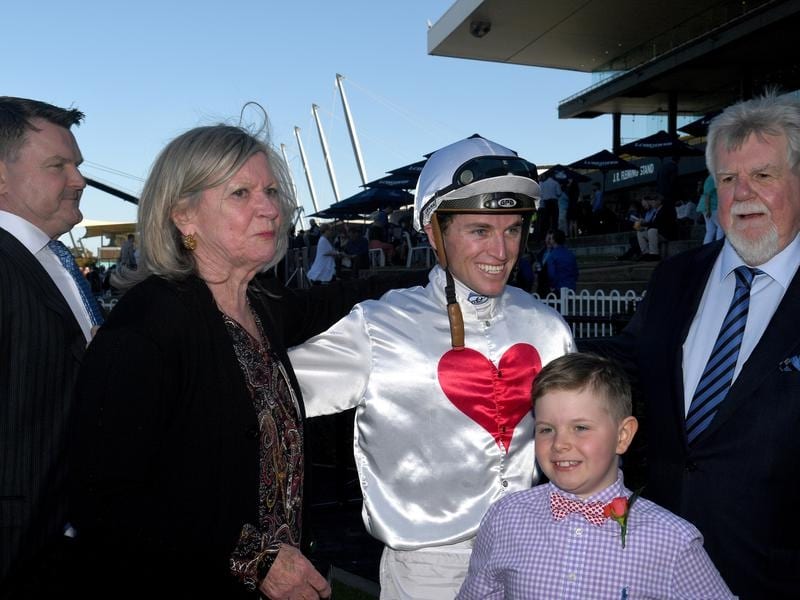 Pam Cornish, seen celebrating a win with her family, has died after a long illness.

She and her husband John, the inaugural chairman of the Australian Turf Club, ran Torryburn Stud in the Hunter Valley, once the home of Dorothea Mackellar and the inspiration for her poem My Country.

The Cornish family’s horses race in distinctive white colours with a red heart.

Pam Cornish was a familiar figure at Sydney racetracks, celebrating her horses along with her family which included children Brett and Tania and grandson Jack.

“Pam was a wonderful woman who battled illness for many years later in her life but continued that brave fight right to the end,” ATC chairman Matt McGrath said.

“Even two Saturdays ago she was at Royal Randwick in searing heat to cheer on another of the Torryburn team, continuing a life so well lived with her dear and beloved family.

“We send our deepest condolences to John and the family, and especially thank Pam for the great passion and contribution she has given to our club and racing.”

“Pam was a tower of strength to John with her witty and sparkling personality that brightened up the room, and she will be sadly missed by the racing fraternity,” Balding said.

A celebration of Pam’s life will be held on Friday at 11.15am in the North Chapel of the Northern Suburbs Memorial Garden and Crematorium at North Ryde.

Her family has asked for donations in lieu of flowers to support Dr Steven Kao and his team at the Chris O’Brien Lifehouse in Camperdown.