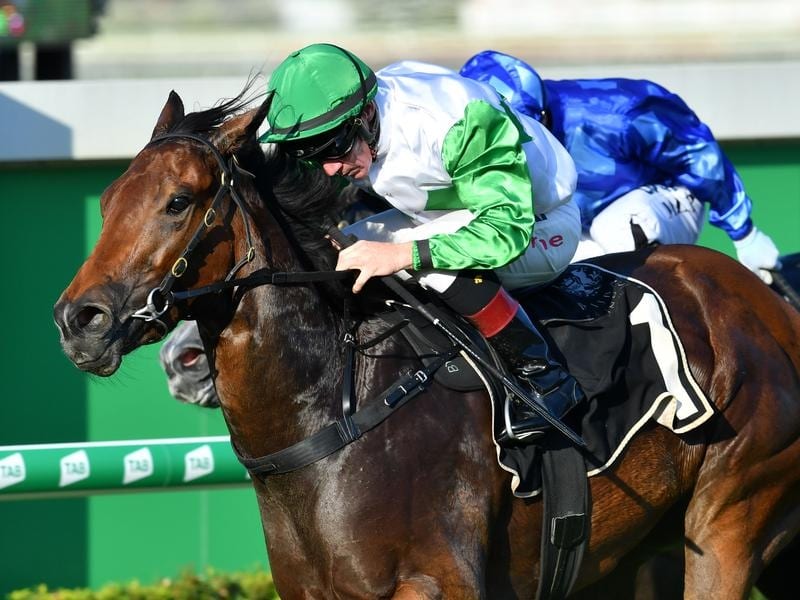 Outback Barbie will wear blinkers when she resumes in the Listed Silk Stocking at the Gold Coast.

Classy filly Outback Barbie will wear blinkers and will be ridden for the first time by Jeff Lloyd when she resumes in the Listed Silk Stocking at the Gold Coast.

Rain has played havoc with premier Brisbane trainer Tony Gollan’s early winter carnival plans but he will have a strong team including three-year-olds Outback Barbie and Ef Troop and unbeaten Zoustyle who are both entered in Saturday’s God Coast Guineas.

Gollan had planned to run some of his winter carnival hopefuls in the Doomben trials last Tuesday but they were washed out.

He then reverted to sending his horses around in jump-outs at Doomben on Friday.

Zoustyle, Ef Troop and Outback Barbie all won their jump-outs as expected in good fashion.

Gollan trialled Outback Barbie in blinkers and is keen for her to wear them in her races.

“When she got beaten a nose in the Magic Millions Guineas her jockey James McDonald recommended we put blinkers on her,” Gollan said.

“The Spirit of Boom breed seem to go best in blinkers rather than winkers. It is a nice race for her to start her campaign.”

The filly is one of 25 entries for the Silk Stocking

Gollan hopes Outback Barbie can measure up to the Group One Tatt’s Tiara on June 22.

LLoyd will be aboard both Outback Barbie and Ef Troop after riding them in the jump-outs.

Ef Troop was scratched from the Mick Dittman Plate on April 20 with the race won by Godolphin’s Plague Stone.

“I didn’t want a gut buster on a heavy track in the Dittman. He is in a good place at the moment and his jump-out on Friday was good,” Gollan said.

Zoustyle, who is unbeaten in five starts, is the favourite for the Group One Stradbroke Handicap on June 7 ahead of nominations.

“I was also pleased with his jump-out and earlier trial. He relaxed nicely in front and the main thing is he recovered quickly and showed he is ready to race,” Gollan said.

“At this stage he will resume in the Gold Cast Guineas but a final decision will be made closer to acceptance time.”

There were 19 nominations taken on Monday for the Group Three race over 1200m.