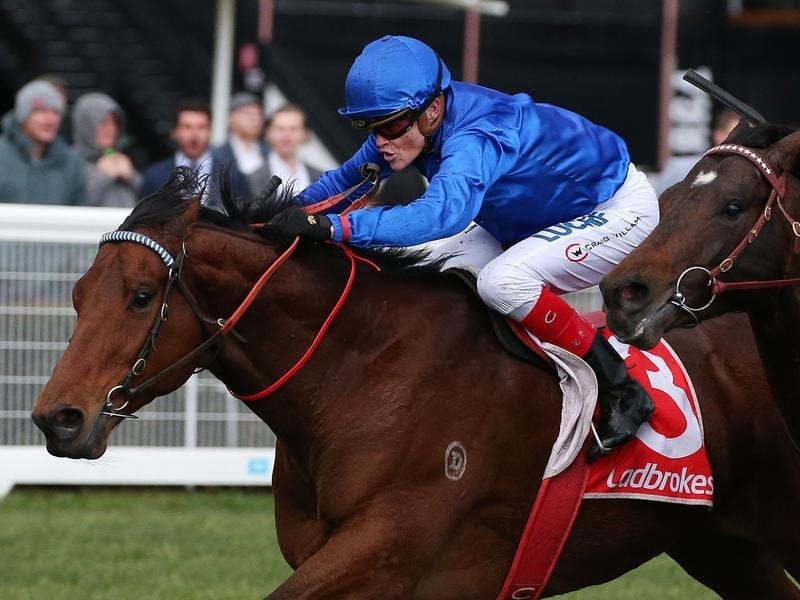 Osborne Bulls (blue) will replace Godolphin stablemate Home Of The Brave in the $13 million Everest.

The drama surrounding the $13 million Everest continues with Godolphin’s Home Of The Brave ruled out of the race with a temperature.

His withdrawal meant slot holder, the Australian Turf Club, needed to choose another runner and it has selected Home Of The Brave’s stablemate Osborne Bulls.

Osborne Bulls was one of six Everest emergencies named on Tuesday morning from the nominations for the Group Three Sydney Stakes on the Everest program.

Tommy Berry, who was to ride Home Of The Brave, will now be aboard Osborne Bulls who finished fifth at his most recent start in the Group One Sir Rupert Clarke Stakes won by another Godolphin horse, Jungle Cat trained in England by Charlie Appleby.

“ATC is pleased to be able to continue its partnership with Godolphin and its Australian trainer James Cummings in the TAB Everest.”

Godolphin managing director in Australia, Vin Cox, said Osborne Bulls was an able replacement for Home Of The Brave.

“Osborne Bulls was the favourite for the Sydney Stakes, the race from which Everest replacements are selected, and it keeps our chances in this great race alive,” he said.

Betting has been suspended on the Everest until the barrier draw is announced on Tuesday night.

The draw has already been conducted behind closed doors at Racing NSW amid concerns of a security risk with a protest scheduled to be held in Sydney over the projection of images on to the sails of the Sydney Opera House.

Osborne Bulls will start from whichever gate Home Of The Brave drew.

If there are any other replacements up until scratching time on Saturday morning, they will occupy the barrier of the withdrawn horse.