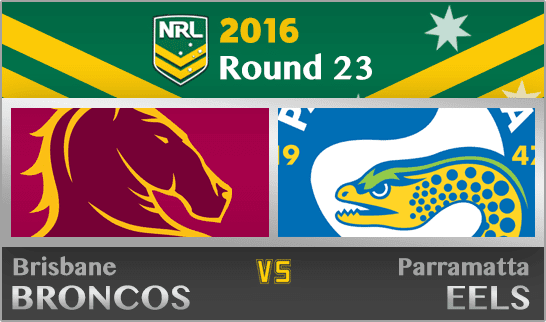 THE two teams that kicked off the NRL season way back in March face off again in what is an enormous Friday night clash.

That match was a very different beast to the contest we will see on Friday night, given the optimism that surrounded both teams coming into the new campaign.

The Brisbane Broncos were once the favourites to win the NRL premiership, but Wayne Bennett’s men now sit in sixth position on the ladder.

Despite their poor form in the second half of the season, punters have not lost total faith in last year’s grand finalists.

Brisbane is on the fourth line of betting at Sportsbet.com.au alongside the Canberra Raiders at $9.

The Eels’ season started out full of optimism, but we all know what happened next.

Parramatta has won the same amount of games as Brisbane, but due to the penalties imposed due to its salary cap infringements the club sits in 13th position, 12 premiership points adrift of the Broncos.

Brisbane is heading into the contest as the $1.22 favourites to make it two in a row and close the gap on the top-four.

Given the head-to-head odds are so short, we elected to look at Friday night’s exotic markets to earn some real cash for our readers.

This week we have cast our eye over the try scorer markets and believe the pair we have identified will have a big impact for their respective teams on Friday night.

Queensland State of Origin representative Corey Oates is our selection for the Broncos on Friday night.

The 21-year-old winger has been a shadow of himself since his well-deserved Origin call up, but the young gun still remains inside the top-eight in the league for tries scored across the regular season.

The superstar needs to lift to get himself back into form to drive his side into the finals, and veteran teammate Sam Thaiday has no doubts that Oates can propel the Broncos back into the premiership frame.

Thaiday conceded that Oates is not in the best of form, but believes things can change in an instant.

“He has had a tough couple of weeks,” Thaiday said.

“People still forget how young he is and the success he’s had so far has been outstanding, but he’s only going to get better.

“If he gets his head right, the rest will go from there”

“I’m sure if he can play some great footy over the next four plus weeks, he might even be getting a call-up to play in the (Four Nations) tour at the end of the year.”

The perfect opportunity presents itself this week against weakened opposition.

We are placing our money on the young winger to have a big impact on Friday night, and we have no doubt he will cross the line at some point throughout the 80 minutes.

Parramatta’s newly-anointed full back Bevan French is our try-scoring selection for Friday night.

The 20-year-old got to taste what it’s like to play in the pivotal position after Jarryd Hayne snubbed his former club, and the Inverell product excelled.

The speed-demon scorched the Sea Eagles defence to cross the line first in the Eels’ come from behind victory last week.

French was optimistic his performance would secure him a full-time spot in the number 1 jersey.

“Hopefully (I can retain my position), I want to play fullback but we’ve got other people there as well that can do the job. It was a good experience for me,” he said.

Can lightening strike twice for the Eels? We think so.

The Melbourne Storm proved earlier in the year that an injection of youthful exuberance can help a side out greatly after debuting Suliasi Vunivalu, who scored the first try on debut and a further two in his next outing.

We believe the move to full back will breathe new life into French and we have no doubt he will be able to cross the line at some stage for his side.