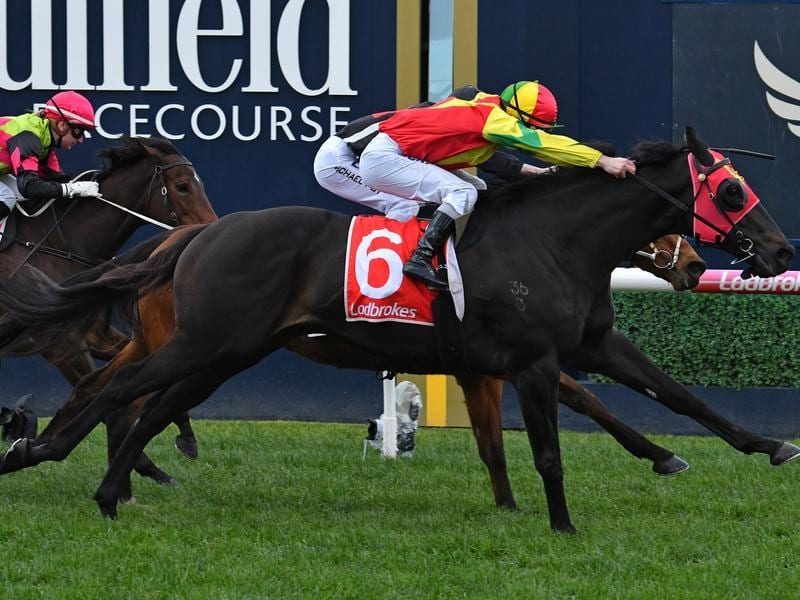 The John Sadler-trained Oak Door has made an impressive return to racing, wearing down favourite Jungle Edge to win the Group Three Sir John Monash Stakes in his first start for nine months.

Proven wet-tracker Jungle Edge ($3.50) was gallant in defeat on the soft rated surface after leading, while Princess Of Queens ($21) was another length away third.

“He had been trialling well (in jump-outs) but he just hadn’t raced for a while so that was our only small concern,” Melham said.

“But off his trials he couldn’t run poorly.

“He hadn’t raced on the wet so that was a little concern but his trials had been on wet ground and he was very effective I felt.”

Melham said Oak Door travelled well, sitting just off Jungle Edge, before digging in when it mattered to notch his sixth win from 23 starts and first victory since August 2017.

“He was within striking distance of Jungle Edge and he let down well,” Melham said.

“I thought he was going to peak on his run but he got alongside Jungle Edge and fought really well.”

Multiple Group One-winning jockey Melham returned last month after recovering from a broken wrist suffered in a fall at The Valley in March.

He posted his first city win back at Flemington last Saturday before another at Sandown on Wednesday as builds momentum again ahead of spring.

“I haven’t had a lot of rides since I came back, just because I’ve been a bit heavy still, but certainly I’m making the most of the opportunties I’ve been getting,” he said.

Oak Door won at Group Two level as a three-year-old when trained by Robert Smerdon.

“John went back to the drawing board and just said we need to give him a nice spell and bring him back on the softer tracks,” Marchant said.

“And it has paid dividends.”

Nikita Beriman rode a winning double at Saturday’s meeting aboard Star Surprise and Tavirun while Jamie Kah copped an eight meeting suspension for careless riding in the day’s opening race aboard unplaced Sukoshi.