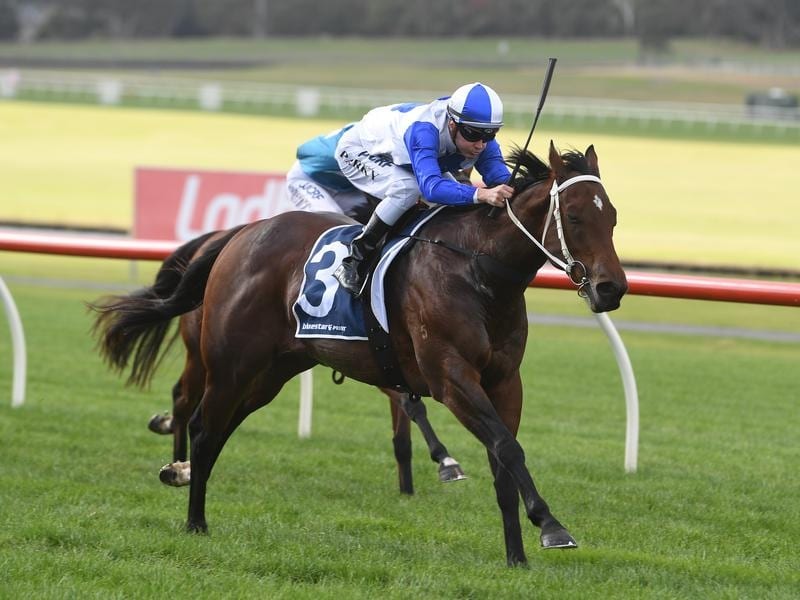 Not Enough Effort will head to the spelling paddock despite keeping an unbeaten record at Sandown.

Not Enough Effort has kept his unbeaten record in tact while showing he’s not one dimensional with a strong performance at Sandown.

After leading throughout in his first two starts at Sale and Sandown, Not Enough Effort took a sit before winning Wednesday’s Blue Star Print Handicap.

Trainer Sharyn Trolove held concerns the three-year-old wasn’t going to reel in leader Heavenly Bridges at the 200m but at the finish Not Enough Effort scored a comfortable one length victory.

“I didn’t think he was going to get there but that shows how good he is,” Trolove said.

“I was worried they would put a bit of pressure on him today and make him over-race, but he settled.”

Trolove said while the gelding loves his work and racing as his manners continually improve, she would consider a break for Not Enough Effort who has been in work since October.

While Heavenly Bridges sped along in front opening up a break early in the straight, jockey Brian Park was confident of reeling the leader in.

Park said he planned on riding the gelding as he had in the past, but was happy to sit off the leader after Heavenly Bridges flew the start.

“I was happy to wait until we got through the dip so we didn’t lose our balance and away he went,” Park said.

“I’ve known the horse has got really good ability and he just keeps stepping up to the plate and I think next prep he’ll be even better.”

Apprentice Ethan Brown moved to within one winner of outriding his claim after scoring aboard Sam Slick in the Le Pine Funerals Handicap.

Brown heads the Melbourne Apprentices’ race and was recently granted an extension to his apprenticeship.

“I’m now in sight and hopefully the last one is not the hardest,” Brown said.

“The owners were starting to get a little impatient,” co-trainer Natalie Young said.

“We took the blinkers off and went back to basics and we’ve ridden him from the back and it’s worked.”