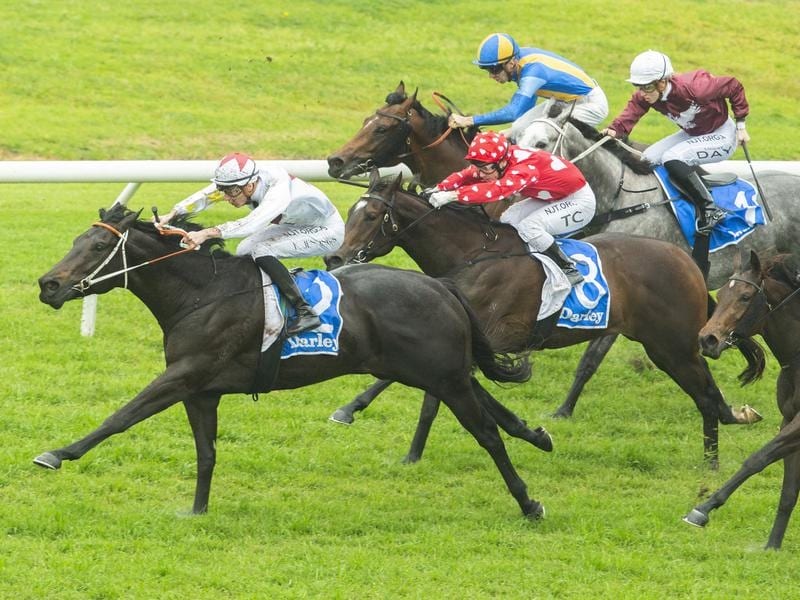 North Pacific outclassed a field of winter two-year-olds to underline his promise at Rosehill.

Michael Hawkes has unveiled ambitious plans for North Pacific, who boasts formlines through the Golden Slipper winner, after the colt outclassed his mid-winter rivals at Rosehill.

The $800,000 yearling purchase finished third to Farnan at his only other start in the Silver Slipper, an impressive reference for the Darley 2YO Handicap (1100m) on Saturday.

Confidently backed as a $2.70 favourite, North Pacific was in a different league to his rivals, using the Rosehill race as a Golden Rose stepping stone.

He firmed from $26 to $15 for the Group One showpiece with Hawkes confirming it was on their radar.

“It always has been with this horse,” Hawkes said.

“For us, it was all about coming here and winning as a two-year-old so he has ticked that box as well

“He is going to be a force to be reckoned with.”

Hawkes felt North Pacific was at the end of his threshold when he contested the Silver Slipper but had enough ability to run third.

Knowing they had an outstanding colt, the team did not risk pressing on with an autumn preparation and spelled him.

Hawkes admitted they might have scratched North Pacific from Rosehill had the track tipped into the heavy range earlier but were glad they rolled the dice.

“I think you will see a better horse on top of the ground,” Hawkes said.

“He got through it today on his ability.”

Koby Jennings, who usually rides at the provincial meetings on Saturdays, was thrilled to pick up the plum mount.

In town to partner Cafe Royal, he got the call-up for North Pacific and made the most of the opportunity.

“The race has panned out for us. We probably had to come a pair further back but that’s all well and good,” Jennings said.

“It’s always the way when you are in barrier one on the favourite. They know exactly where you are.”