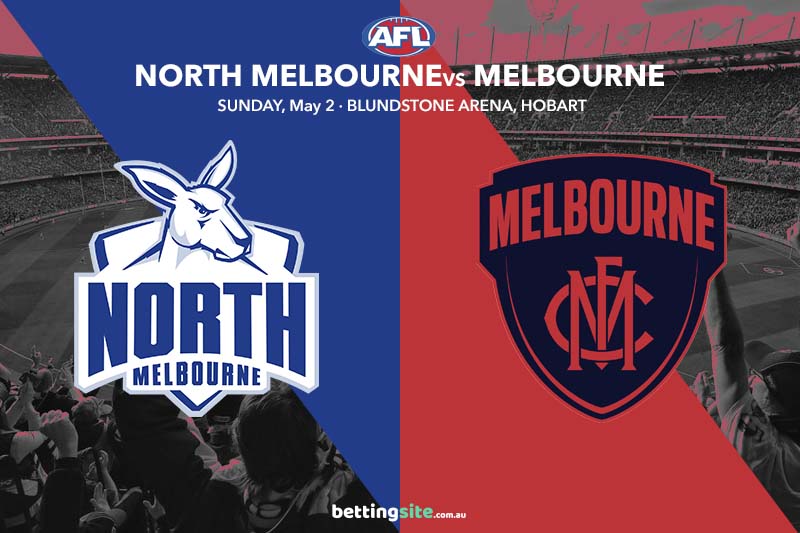 The winless host the undefeated as North Melbourne and Melbourne clash at Blundstone Arena, Tasmania, in the AFL’s round seven Sunday afternoon clash.

Simon Goodwin entered the 2021 AFL season under immense pressure, but a 6-0 start with wins over Geelong and Richmond has put the Demons in an unbelievable position. On the flipside, David Noble and the Kangaroos are in a tragic state, having lost all six of their opening matches without coming close to a victory.

Ben Brown will make his Demons debut against his old teammates, adding some much-needed extra spice to this projected one-sided contest.

The big question for this match will be whether the Kangaroos can manage against the red-hot Demons, and online bookmakers are predicting they will not get close. The 58.5 line indicates the Dees will be runaway winners, but the Roos have beaten Melbourne in their last three matches at Blundstone Arena. We think this is the perfect time to back in the Kangaroos at the line.

Historically, the Roos and Dees have faced off in predominantly high-scoring matches, but given both teams have completely different make-ups this season, we think they will buck the trend. Over the past two rounds, neither side has played in a match exceeding 160 total points, and we think that will be the case again this week.

Before Ben Brown made his move to Melbourne, he and Ben McKay would have spent plenty of time against each other at training, but now they will face off on the big stage.

Ben Brown kicked seven goals in his two VFL matches before Simon Goodwin decided he was ready for the senior squad, and he has timed his run perfectly to face the inexperienced McKay.

Unfortunately for North Melbourne, its developing full-back has been under the pump in defence, conceding an enormous number of goals to key forwards this season. Ben Brown should join the party on debut and punish his former team.

North Melbourne Kangaroos +58.5
The Demons start this match at an unbackable $1.02, but there is still value in the handicap betting. We think the Roos will put together a strong performance at Blundstone Arena, as they are undefeated against the Dees in Hobart. The Kangaroos easily held a similar line against Geelong at GMHBA in round four, so we are expecting a similar outcome at their second home ground.

Jaidyn Stephenson to kick 2+ goals
One positive North Melbourne can take out of the first six weeks has been the scoreboard productivity from Jaidyn Stephenson. The 2018 Rising Star winner has kicked eight goals in the past four weeks, consistently kicking two goals per game. The former Magpie loved the Queen’s Birthday match up against the Demons, kicking 4.3 and 3.3 in his two encounters against Melbourne.

Same game multi: 4 legs @ $17.75
David Noble may need to wait a while longer before he records his first AFL win as a head coach, but we still expect his Kangaroos to push the Demons for at least three quarters. Jaidyn Stephenson and Ben Brown will be the two main goal-kickers in a low scoring affair. These four legs will net you $17.75 with Aussie bookmakers that have same-game multis available.