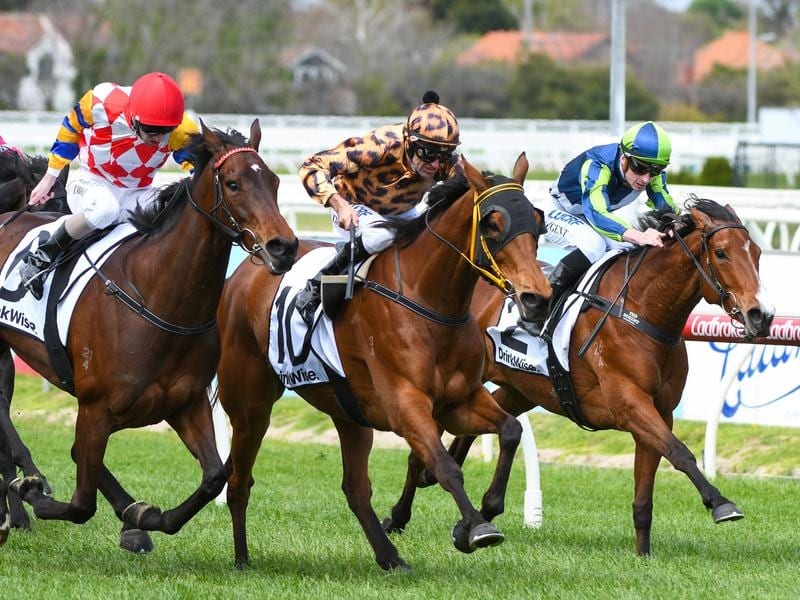 No Effort (centre) has given trainer Allan Cooper a rare city winner at Caulfield.

Allan Cooper’s first appearance at a city racecourse in a quarter of a century has resulted in him training a winner at Caulfield.

No Effort extended her winning sequence to four when successful in Sunday’s Drinkwise Plate (1800m).

Jake Noonan, rider of the runner-up, viewed a replay of the concluding stages before deciding not to lodge a protest.

Like No Effort, Annarbor was attempting a fourth win on end.

Cooper, trains at Cranbourne, said his last city runner was Rich Dreams in the Duke Of Norfolk Stakes, now known as the Andrew Ramsden Stakes, at Flemington in 1993.

He stepped away from training for 10 years before taking it up again in 2016 and now has two horses in work.

“I went to Berrigan with a little horse that won and I ended up getting six months suspension after they found a go-slow drug in its system,” Cooper said.

“I was a bit stressed out over that so I gave it away after that for a while.

“You go along without a headache for a fair while but then you just have to go back to banging your head against the wall after a while.

“It’s good having a couple in work, getting over to the track and talking to your mates for an hour or so of a morning.