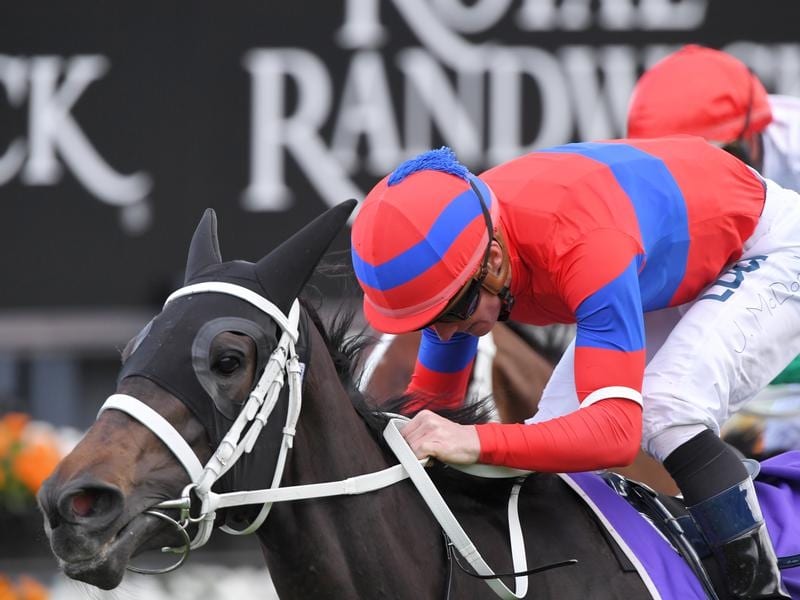 Trainer Chris Waller will take the ear muffs off Verry Elleegant for her Apollo Stakes return.

A conversation with rival jockey James McDonald has given Tim Clark confidence quirky mare Verry Elleegant can run a race when she resumes in the Apollo Stakes at Randwick.

McDonald is the mare’s regular rider but he will be in Melbourne on Saturday to partner top sprinter Nature Strip in the Group One Lightning Stakes.

His absence has paved the way for Clark to link with Verry Elleegant, who was one of the stars of last year’s Sydney autumn carnival before a mixed spring, highlighted by a Group Two win in the Hill Stakes.

The mare has been guilty of over-racing at various stages of her career and was fitted with ear muffs to help keep her settled.

But trainer Chris Waller has opted to take those off for Saturday’s 1400-metre race after she trialled successfully for McDonald without them.

While Clark will be riding Verry Elleegant for the first time on Saturday, he is familiar with the mare and her quirks.

“I’ve seen her race a fair bit. She obviously can do a few little things wrong but they’ve worked hard to get her to do things the right way,” Clark said.

“I was actually going to trial her the other day but Chris wanted to trial her without the ear muffs and he wanted James’ feedback, so I didn’t get the opportunity to sit on her.

“But I was speaking to James briefly after the trial and he seemed to think she was a bit more switched on without the ear muffs.”

Trainer James Cummings is in two minds about running Alizee if the track is heavy and will make a final decision on race morning, nominating the Futurity Stakes in Melbourne on Saturday week as a back-up.

A wet track will only enhance the prospects of Verry Elleegant who has won four of her six starts on soft ground and is unbeaten on heavy.

“It’s short of her best distance but the wet track will bring her into it and I expect she will run a nice race first up,” Clark said.

“There are a lot of first uppers in the race so conditions are going to be very important in terms of how wound up some of the horses are.”

Eight of the 10 runners are resuming in the Apollo with Alizee and the Hawkes Racing-trained Glenall the two horses with a fitness edge.

English jockey Jamie Spencer will make a cameo appearance at Randwick to ride Glenall and will also be aboard the Hawkes-trained Dawn Dawn in the Triscay Stakes.